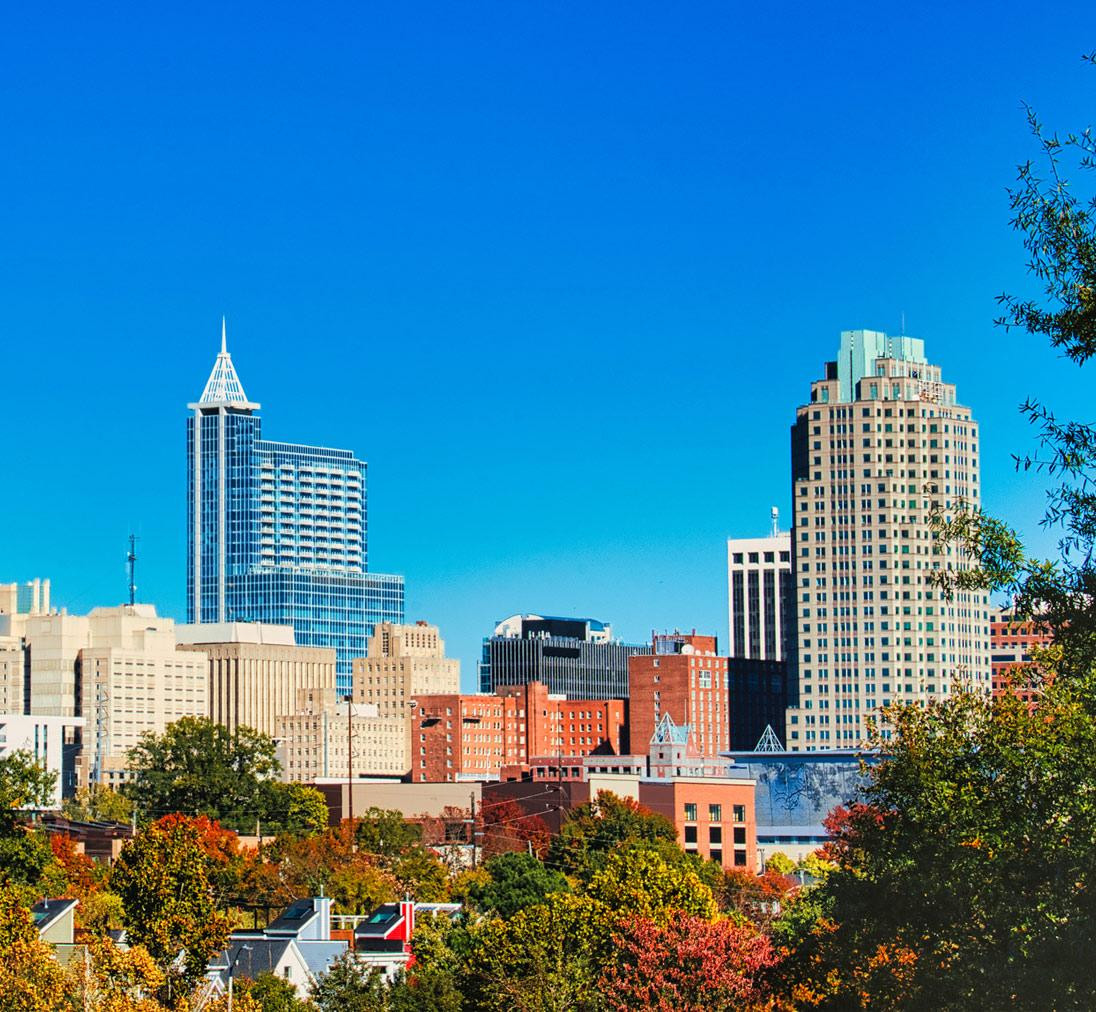 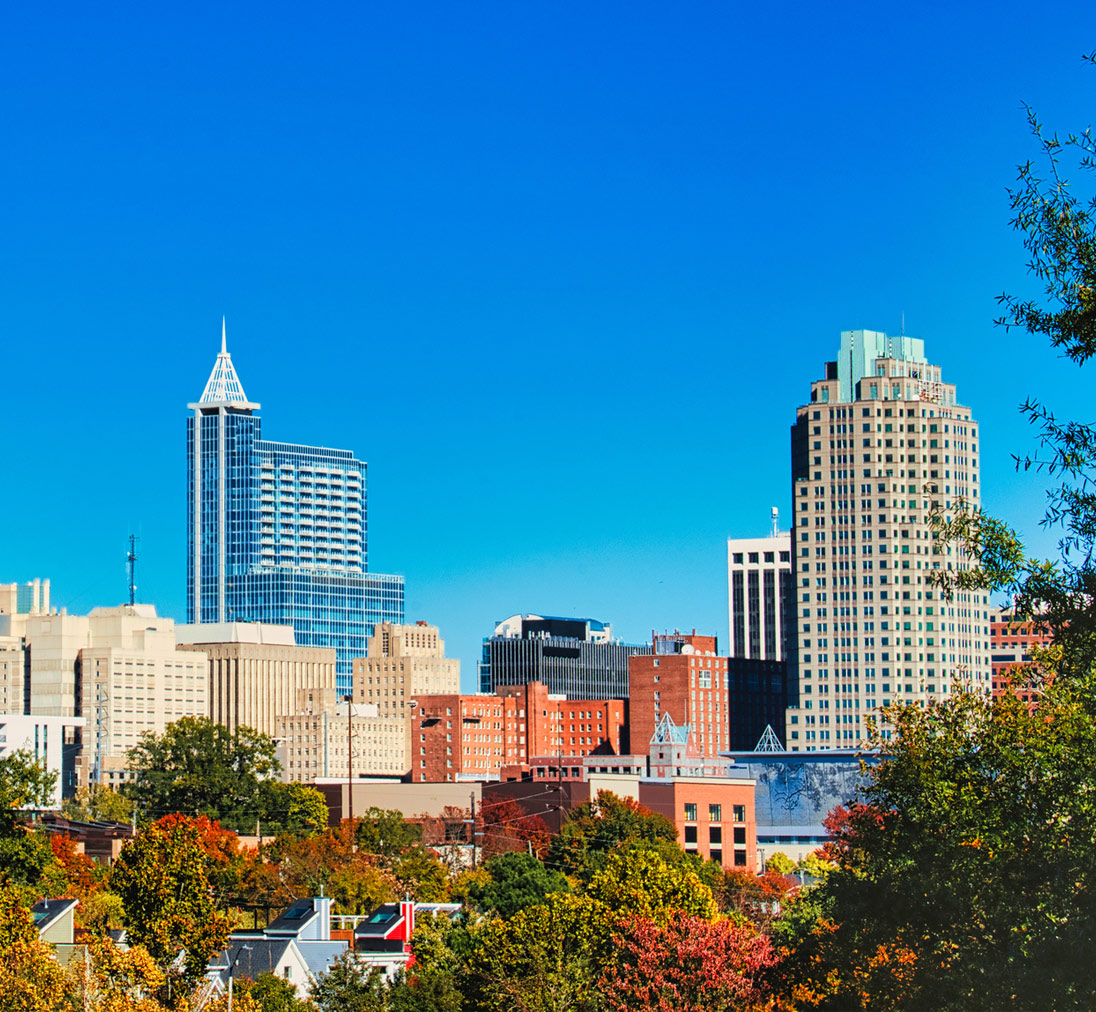 Safety is always a priority when looking for a new home. Sure, it's nice to snag a deal on your dream home, but finding a safe community will always be more critical. To make your decision easier, we've researched and ranked the safest cities in North Carolina based on six factors:

We scored the 30 most populated cities in North Carolina, sourcing data from the FBI, U.S. Census, and Best Places. Safety is just one factor to consider when buying a house, but it's hard to gauge when you're unfamiliar with an area.

Consult our guide when looking for a home in North Carolina to help you make safer choices and find the perfect home for the next chapter of your life.

Methodology disclaimer: We've included indirect factors like poverty rates to broaden our scale. However, these factors are weighted less than crime rates because poverty rates and income alone don’t determine whether or not a city is safe. We break down how each element was weighted in our methodology section.

Fuquay-Varina is a smaller city in North Carolina. It draws people looking for small-town charm with access to all the conveniences (and fun!) of living in a city.

Fuquay-Varina is less than 20 miles from Raleigh. It ranks second for the lowest rates of both violent and nonviolent crimes in our research. Although the cost of living is 1.6% more expensive than the national average, the median income is 23% higher in Fuquay-Varina. These factors earn it our ranking as the safest place to live in North Carolina. 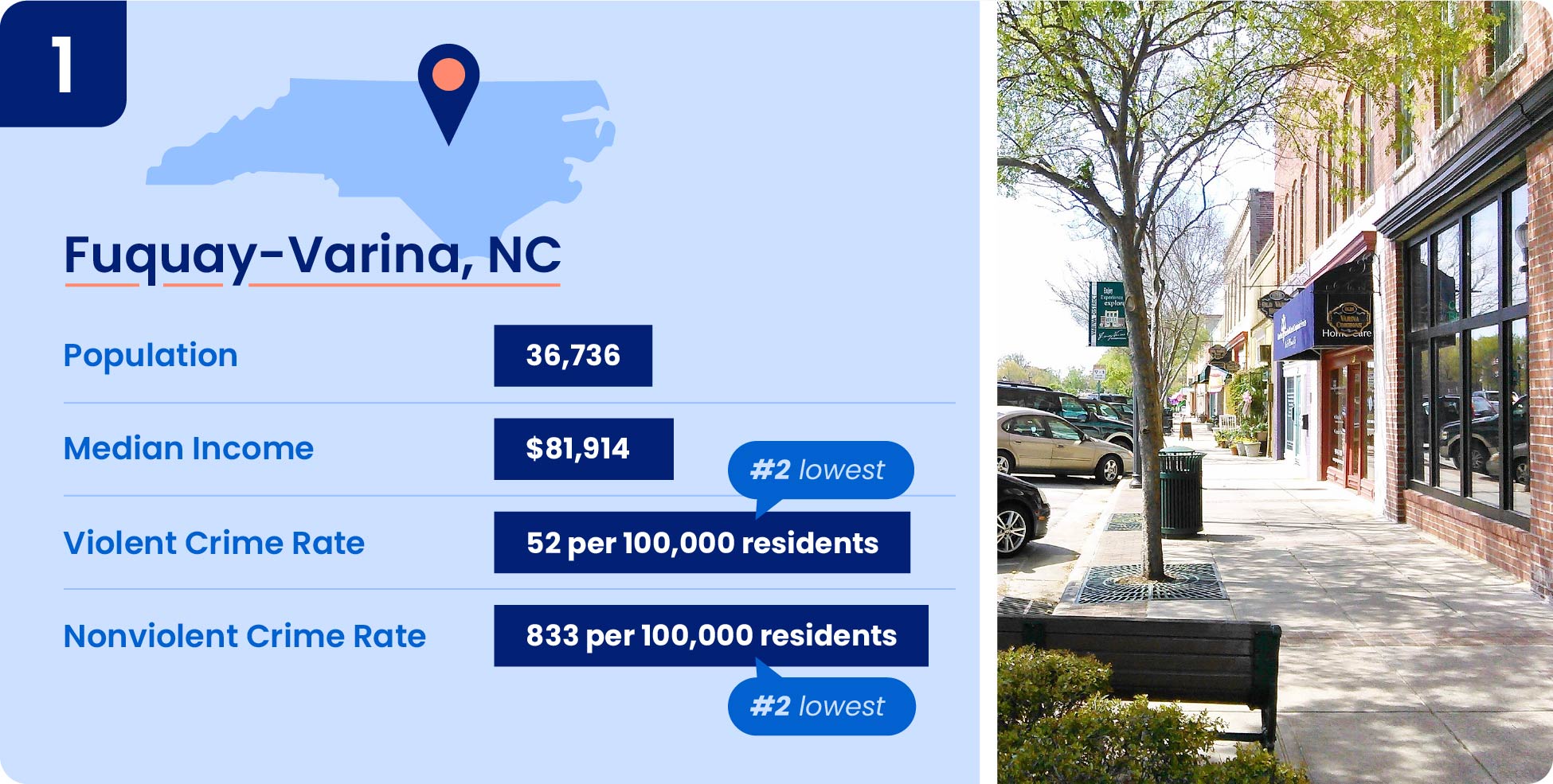 Located west of Raleigh, Apex is a great midsize city to move to in North Carolina and ranks number two on our list. According to our research, Apex has the lowest violent crime rate and fifth lowest nonviolent crime rate of all the cities we studied.

Residents love the abundance of green belts and historic charm. The job market in Apex is booming and the poverty rate is below 4%, which makes this city enticing for many young professionals. 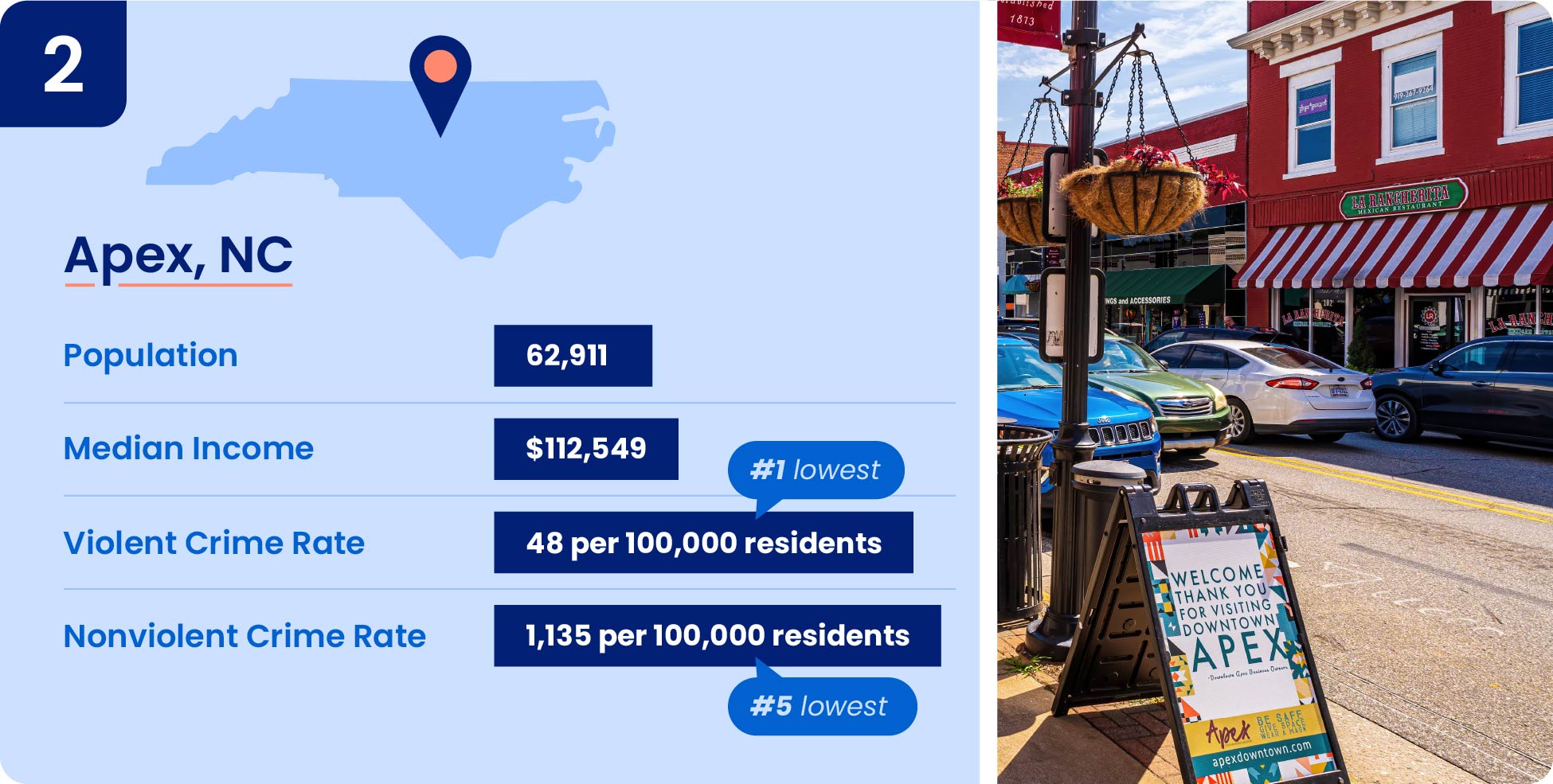 Holly Springs is a town in Wake County where residents boast about access to multicultural events, sports, and a growing downtown space. According to our rankings, it’s the third safest town in North Carolina. 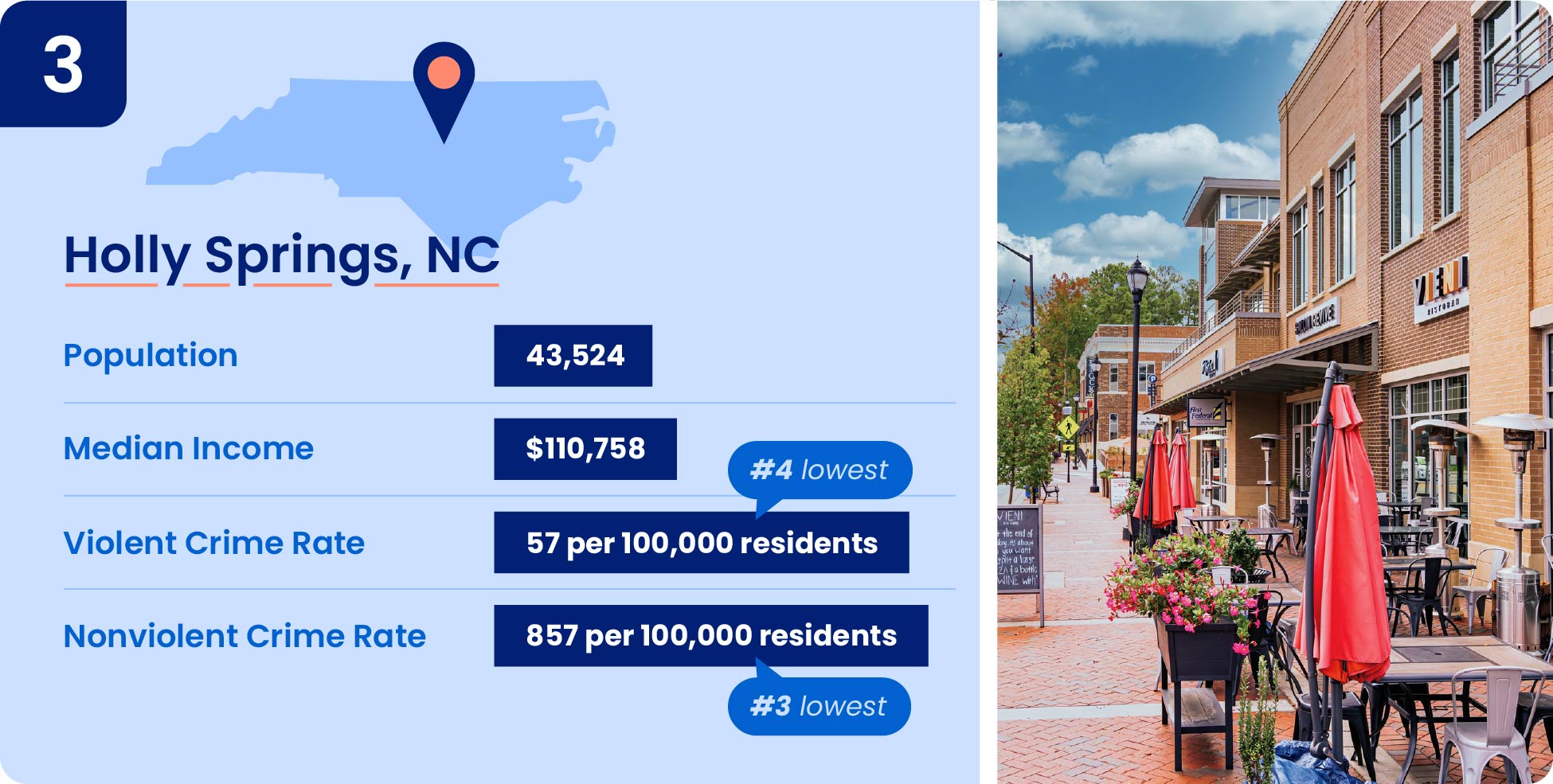 Cary is the second largest city in Wake County after Raleigh. Despite being the second most densely populated city in our study, Cary ranks third for the lowest violent crime rate and fourth for lowest nonviolent crime rate. However, cost of living and population density are high, so Cary is number four for safety overall.

The future in Cary is bright, as it’s expected to receive almost $12 million in federal funding to improve public transit infrastructure. The Cary Community Plan also projects many improvements across the city, such as historic preservation, which should be completed by 2040. 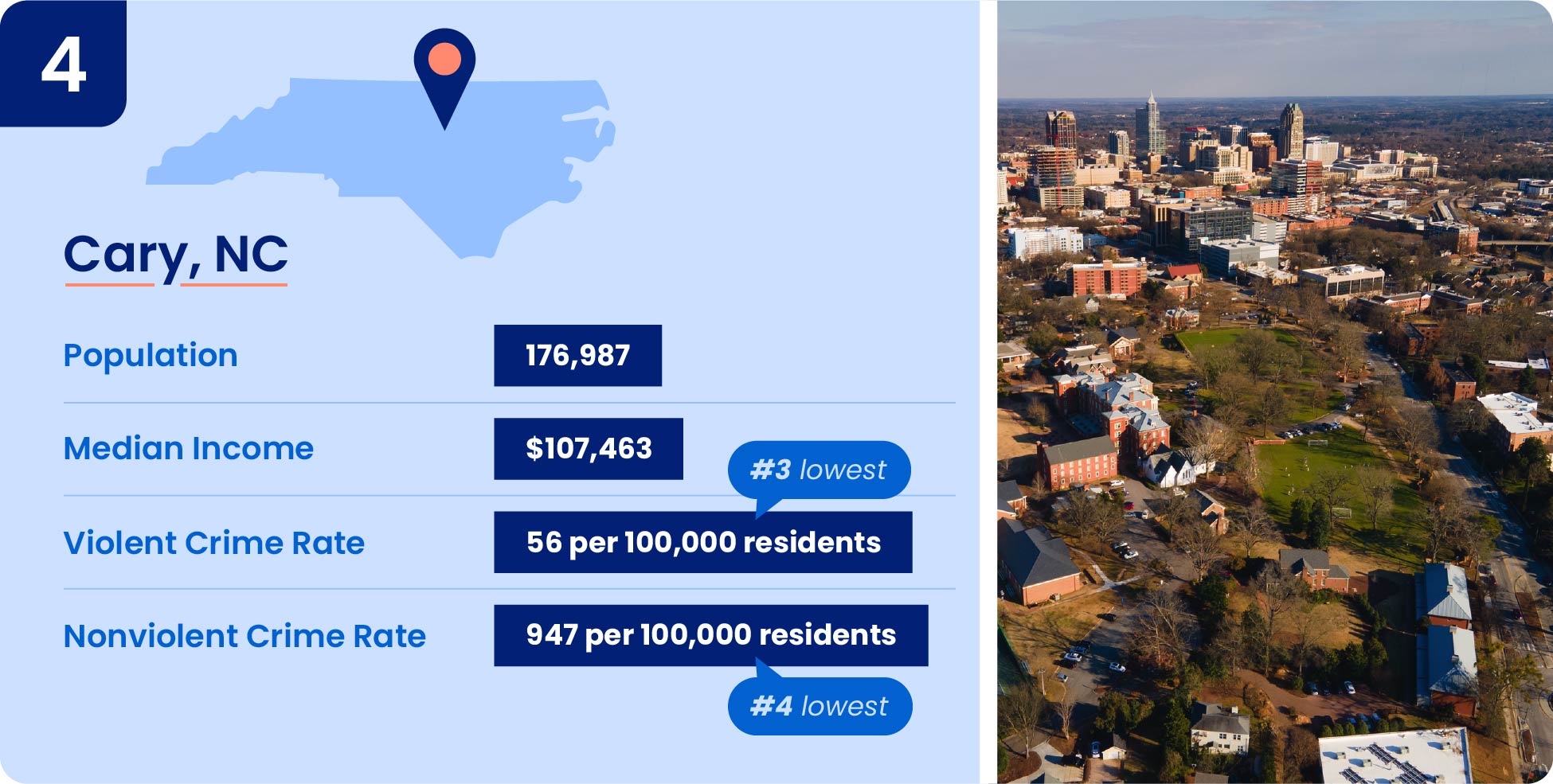 Concord is the sixth fastest-growing city in North Carolina, with a 33% growth rate between the 2010 and 2020 censuses. The city is working on three new housing projects downtown, which are slated for completion by spring 2024. 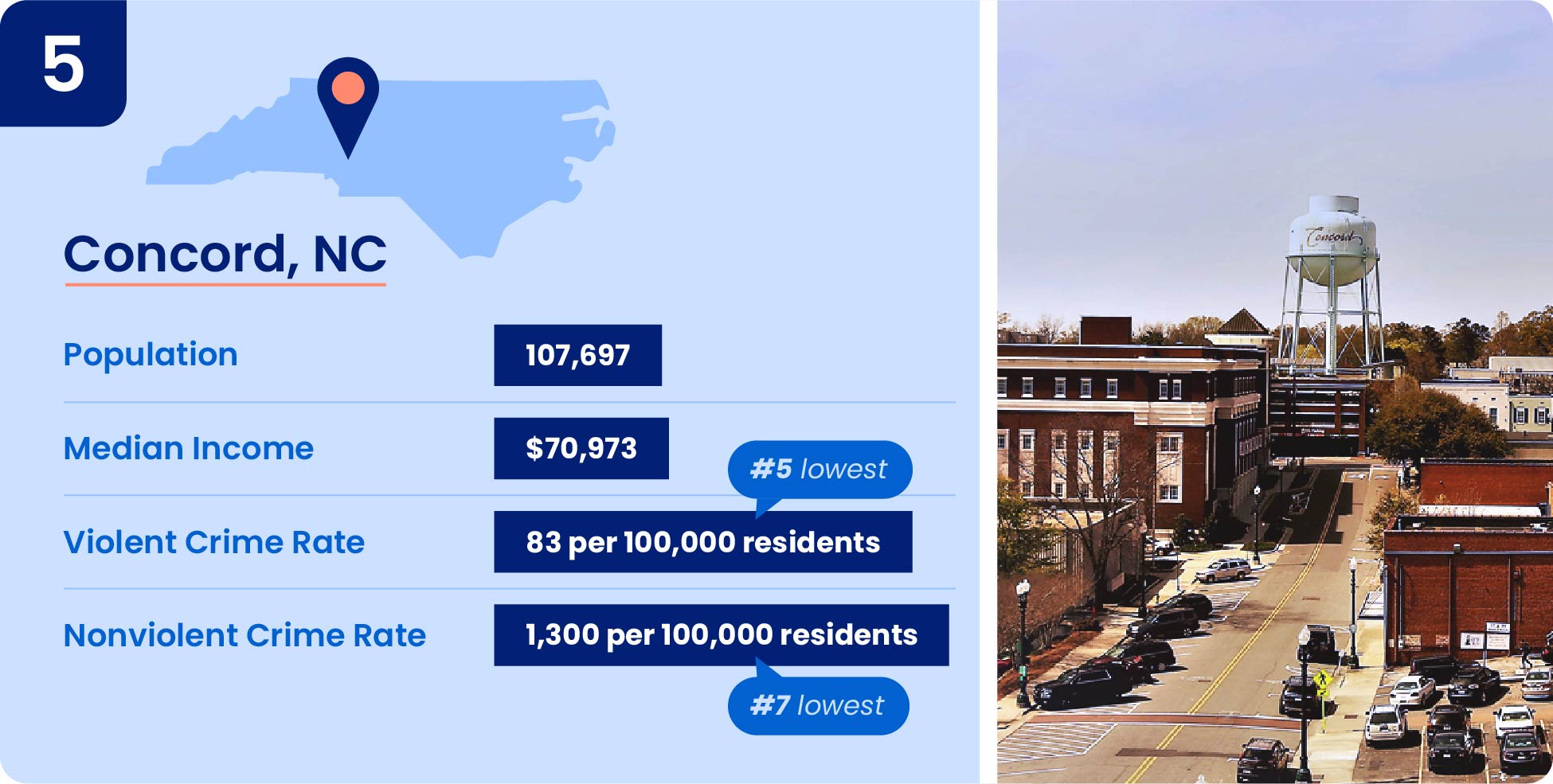 It also has a very low cost of living, hanging 18.7% below the national average. Winston-Salem is also home to Wake Forest University, making it a great place for younger populations or those who prefer a quiet summer. 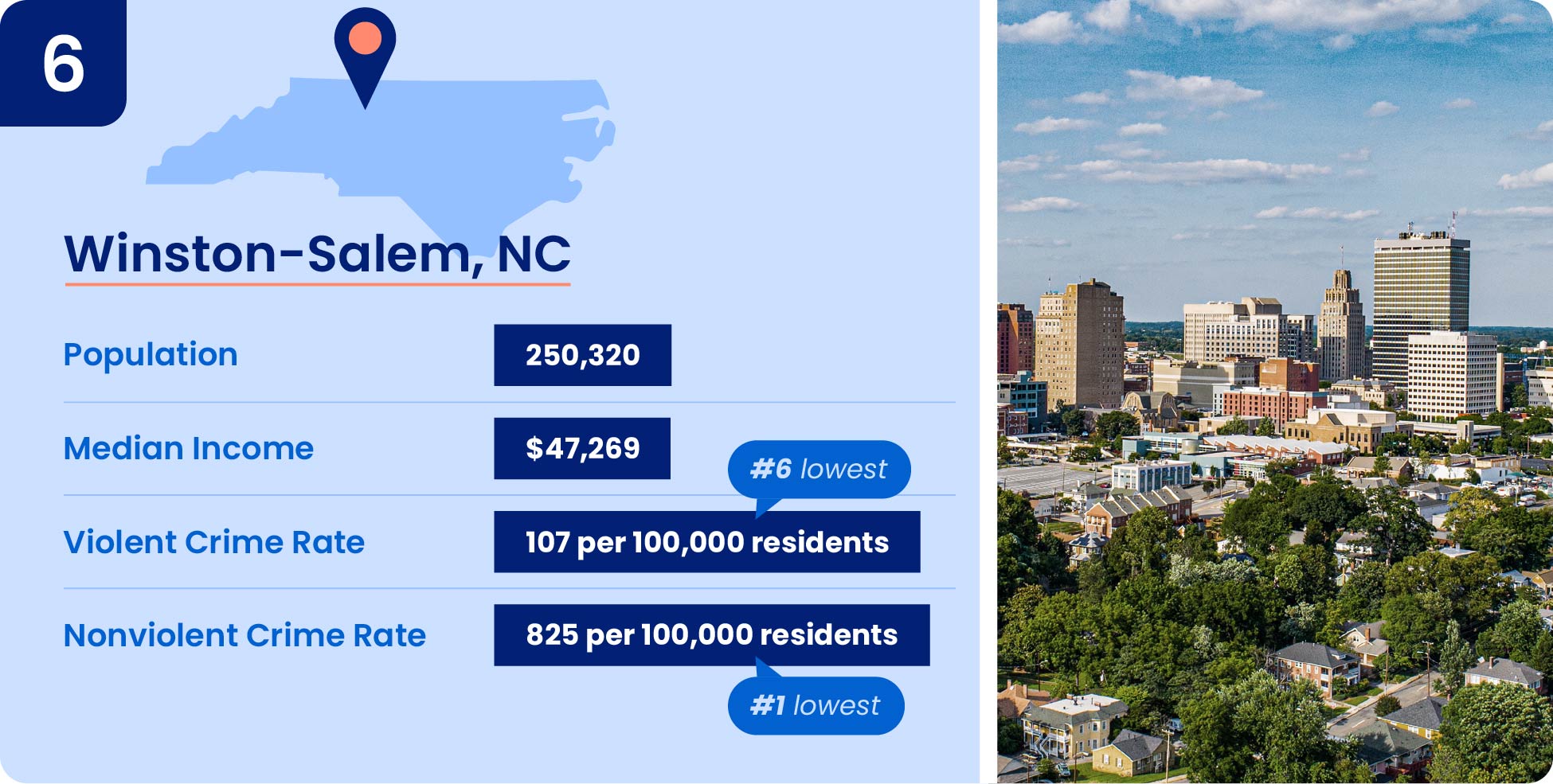 Wake Forest is proposing a $75 million budget to improve parks and recreation, roadways and transportation, greenways, and parking opportunities throughout the city. These projects will be on the ballot in November 2022. 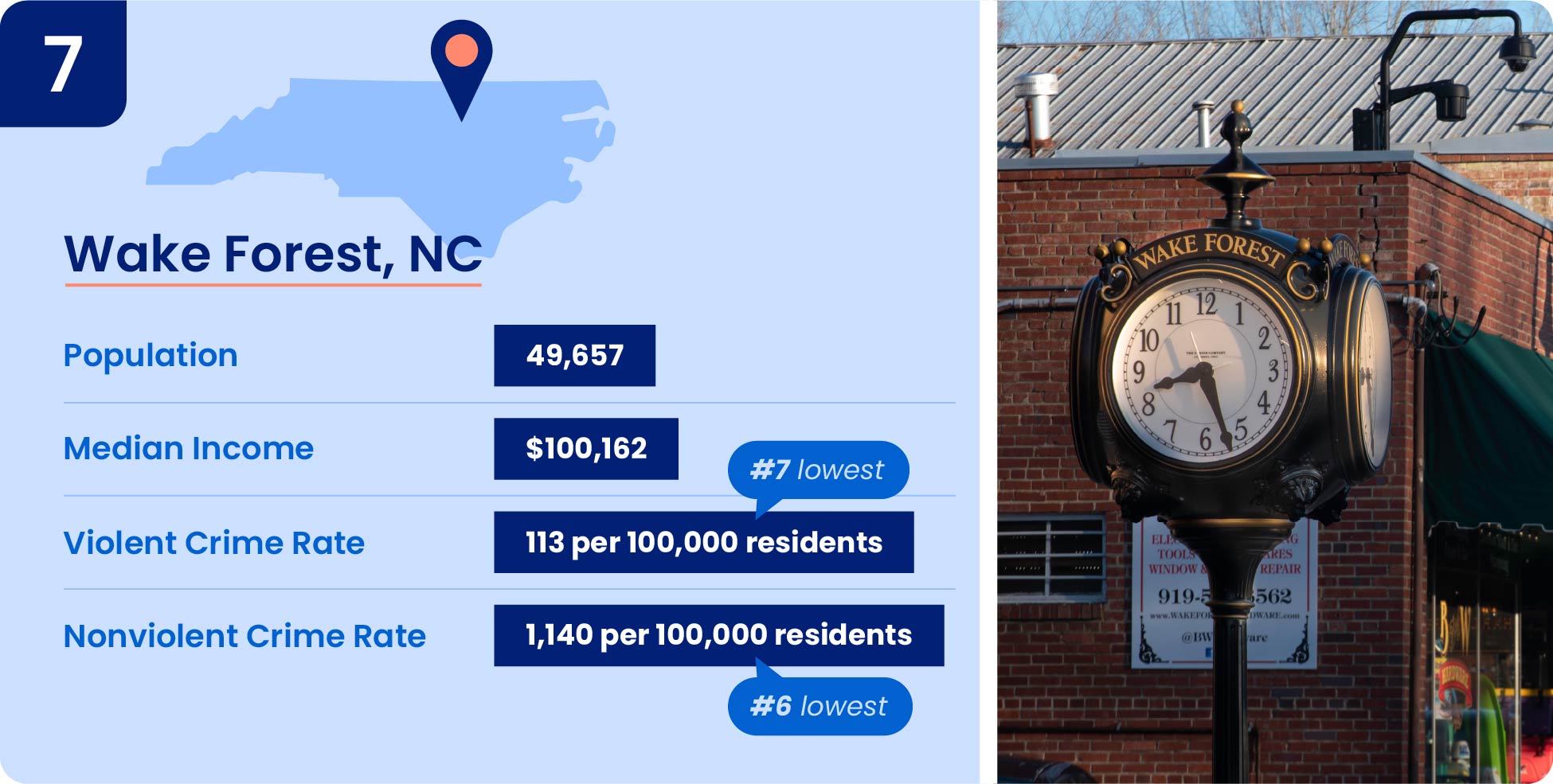 Despite relatively low crime rates, this city’s on the second half of our list due to the cost of living. The cost of living in Chapel Hill is 18.4% more expensive than the national average and has a high cost of living compared to the rest of North Carolina. 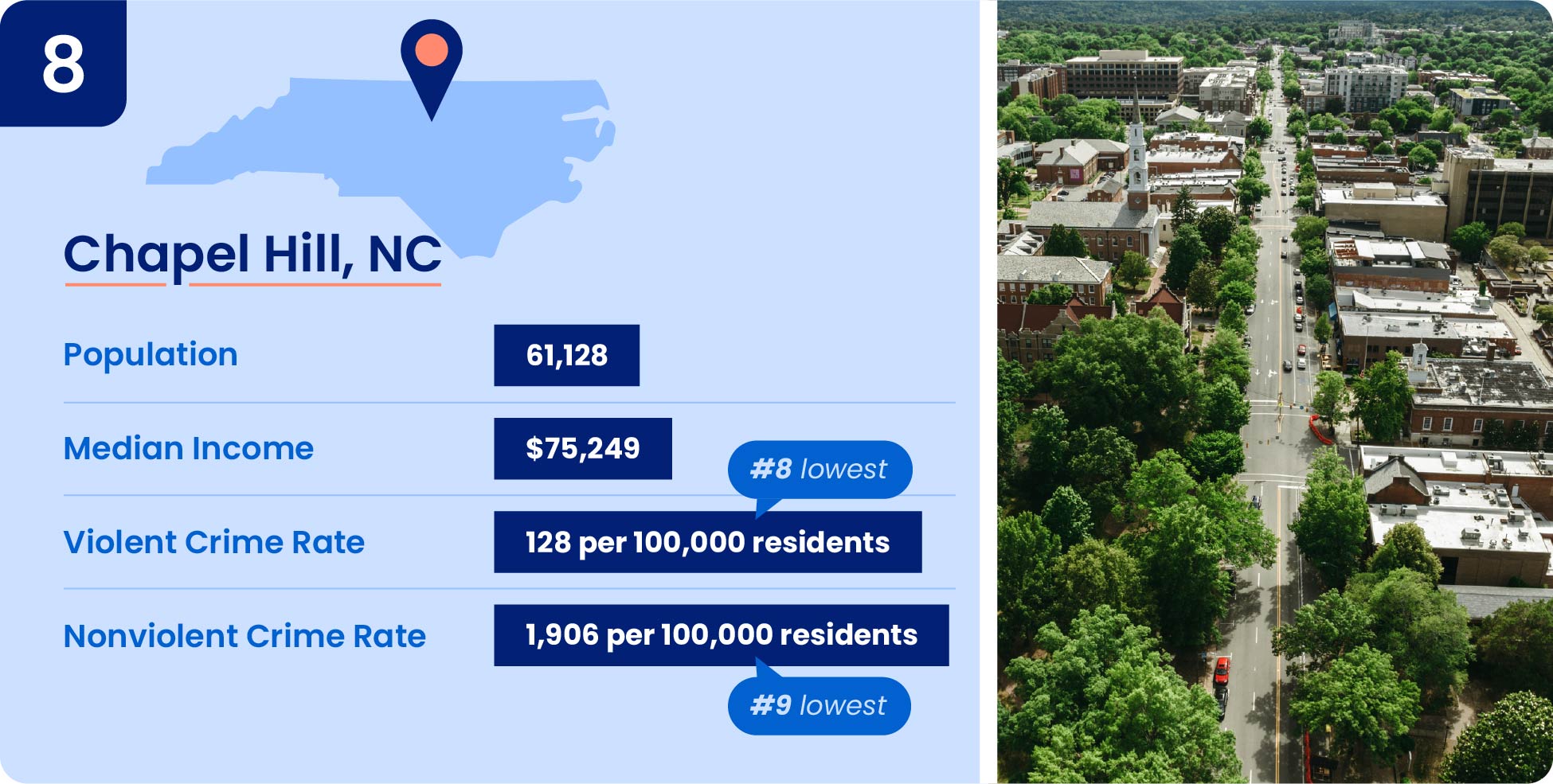 Mooresville, North Carolina is the largest city in Iredell County. While Mooresville has a relatively high cost of living at 6.8% above the national average, its poverty rate is lower than both national and state rates.

Mooresville has low crime rates relative to its high population density — it’s ranked 10th for both violent and nonviolent crime. Although it’s in a different county than Charlotte, it’s considered a part of the Charlotte metropolitan area. 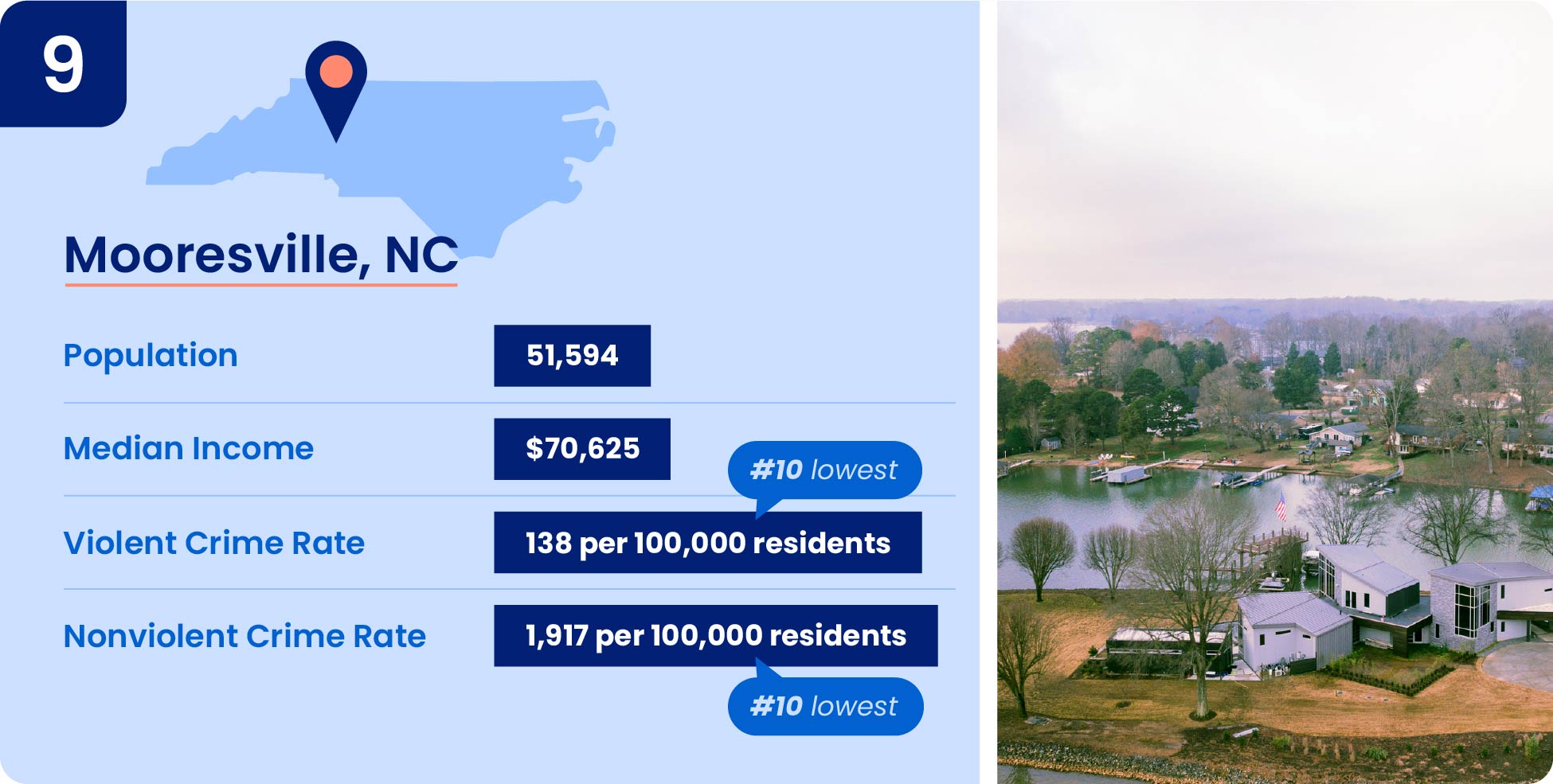 Coming in at number 10 on our list, Kannapolis is a city in North Carolina where the cost of living is more than 15% lower than the national average. It’s ranked 11th for violent crime and 13th for nonviolent crime.

From its roots as a manufacturing center, Kannapolis’ economy is now oriented toward health sciences. The North Carolina Research Campus is home to eight different university programs, and brings many research, education, and other health science job opportunities to Kannapolis. 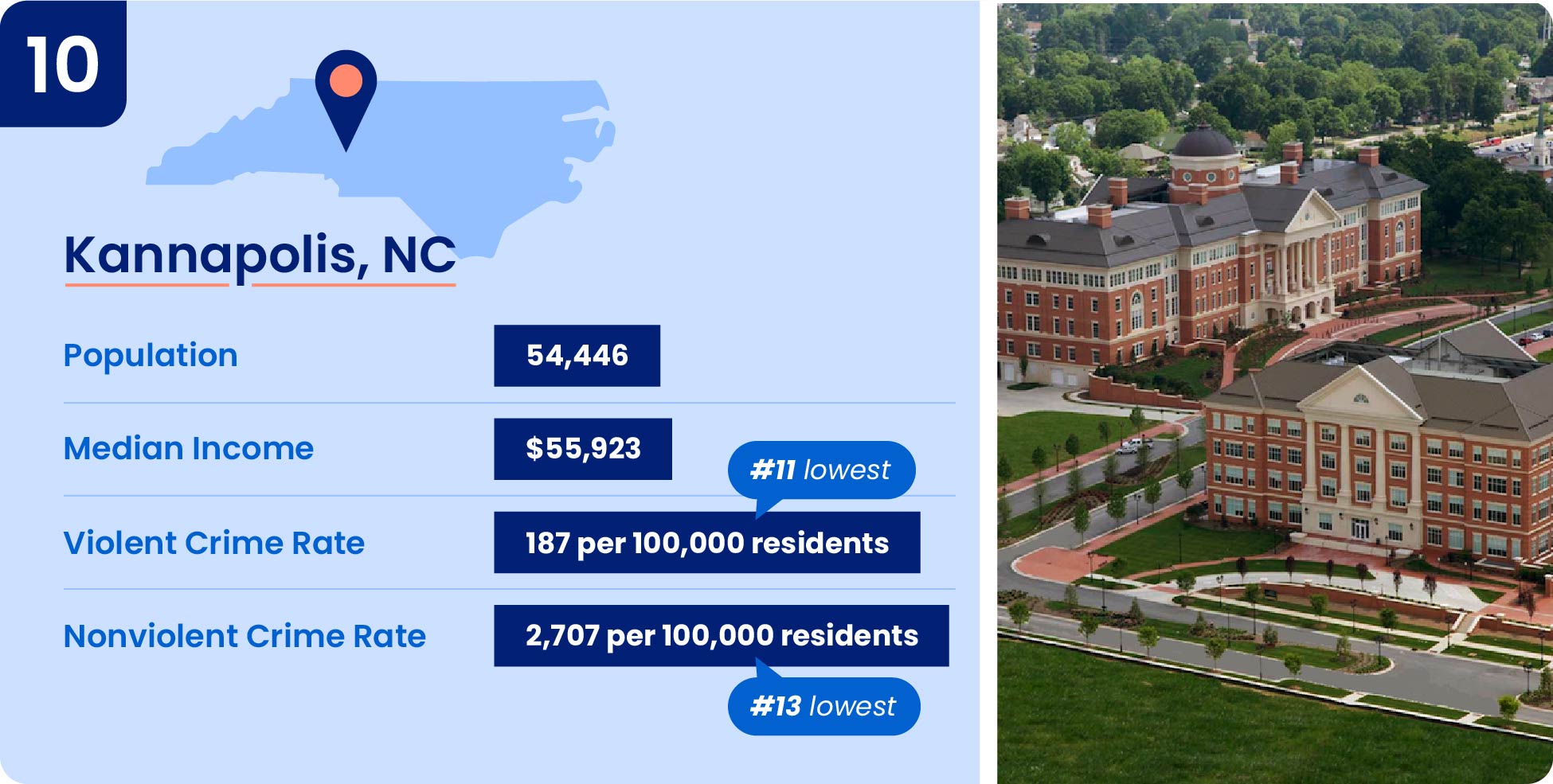 Jacksonville is seated in Onslow County and contains Camp Lejeune, a large Marine Corps base. The cost of living is 15.7% less expensive than the national cost of living and the economy is stable because of the close proximity to Camp Lejeune. It’s ranked 12th for violent and nonviolent crime, making it the 11th safest city in North Carolina overall.

Jacksonville is a coastal city with easy access to the ocean and the New River. Along with the low cost of living, the city of Jacksonville offers down payment assistance to qualified buyers looking to purchase homes in the downtown area as part of its Neighborhood Housing Initiative. 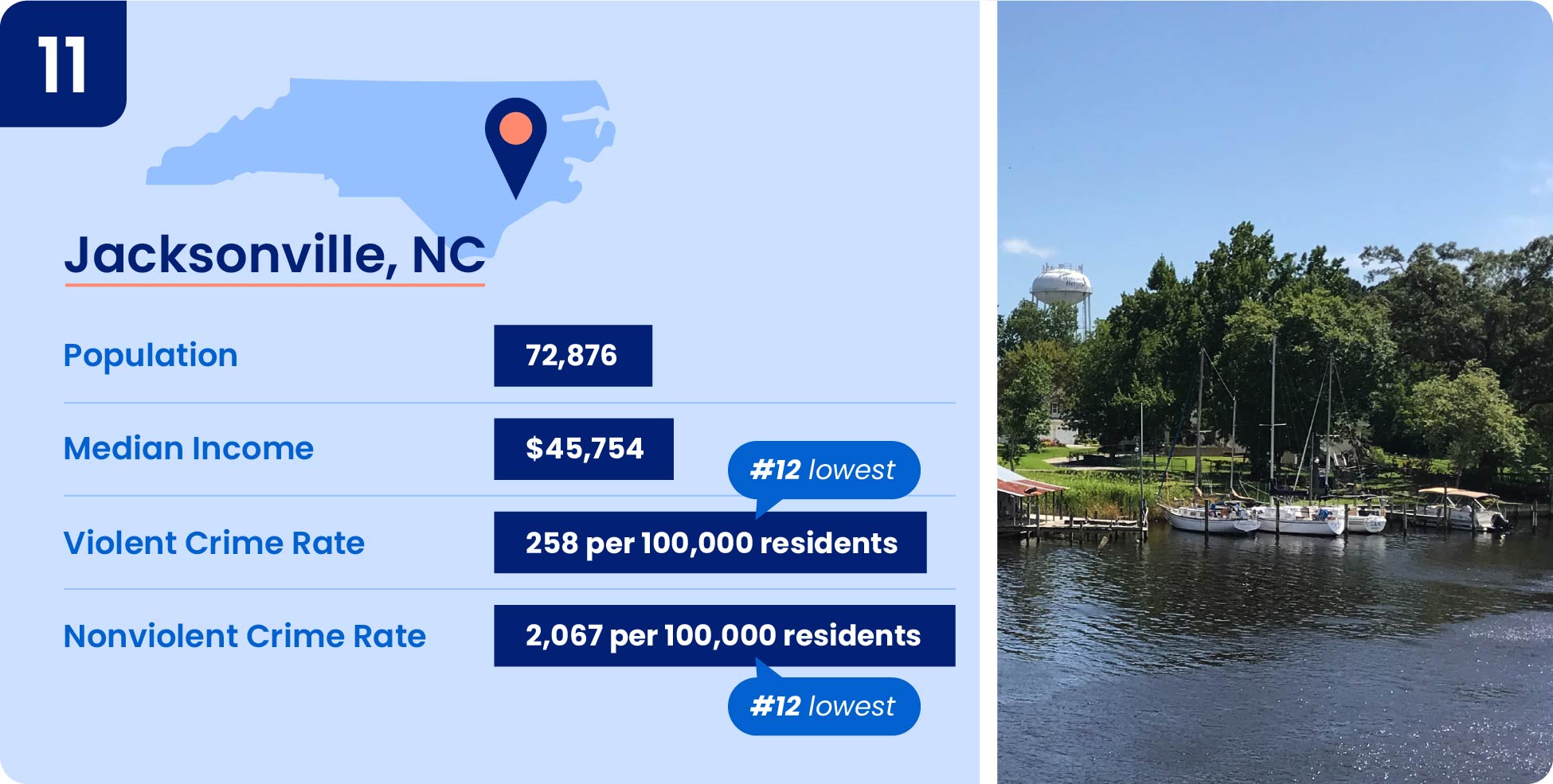 Raleigh is the most densely populated and second largest of all the cities on our list. Especially for such a high population and population density, rates of violent and nonviolent crime in Raleigh are relatively low, coming in at 13th and 11th, respectively.

Raleigh is a growing city, with a 15% population increase since 2010. Residents enjoy a well-optimized bus system through GoRaleigh with fares maxing out at just $1.25. 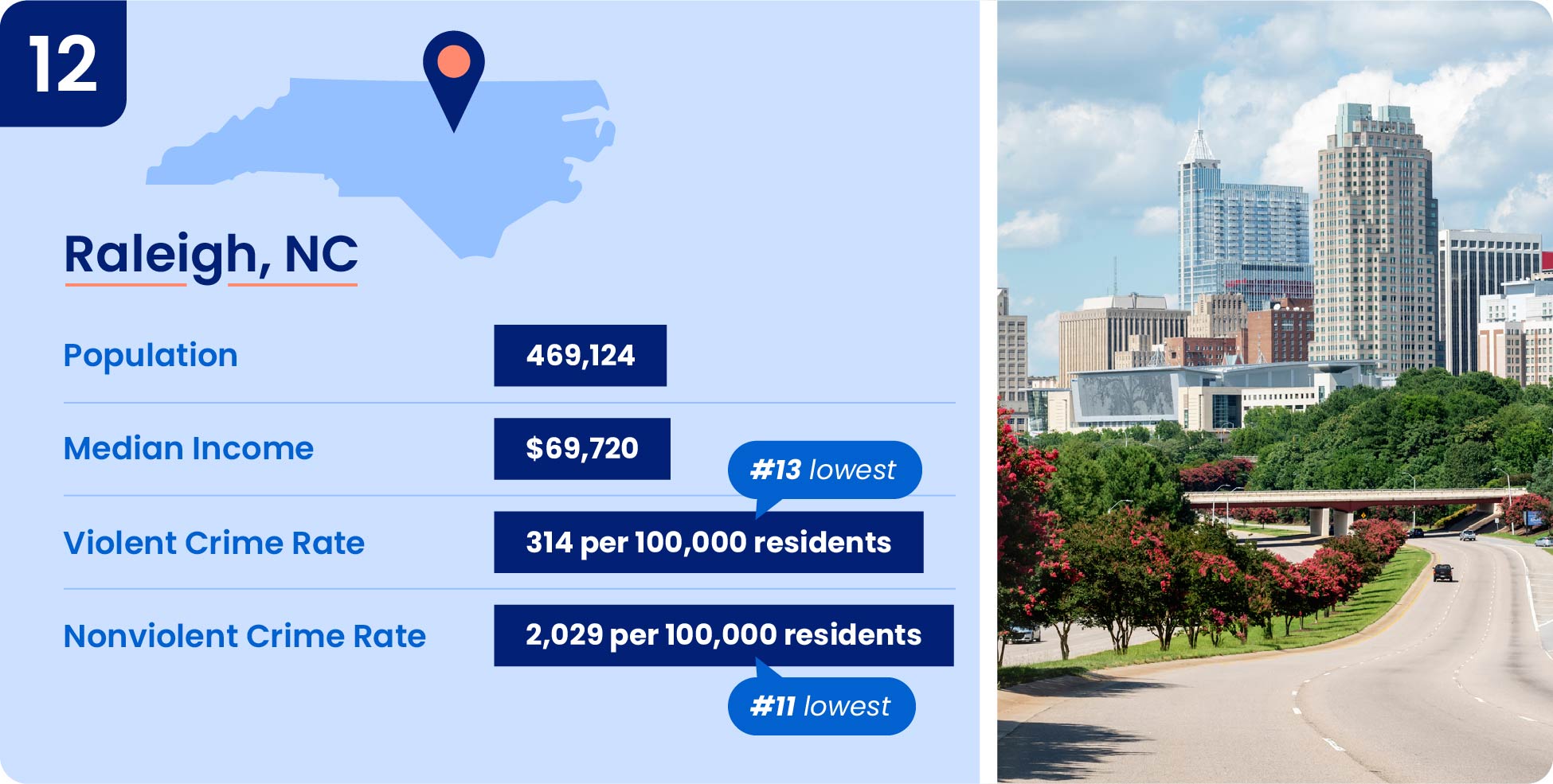 In addition to being one of the safest cities in North Carolina, residents love Greenville for its affordability and abundance of bike lanes. Transportation is very affordable, with bus fare running from free to $2. There might even be a passenger rail system in Greenville’s future, with a feasibility study currently underway. 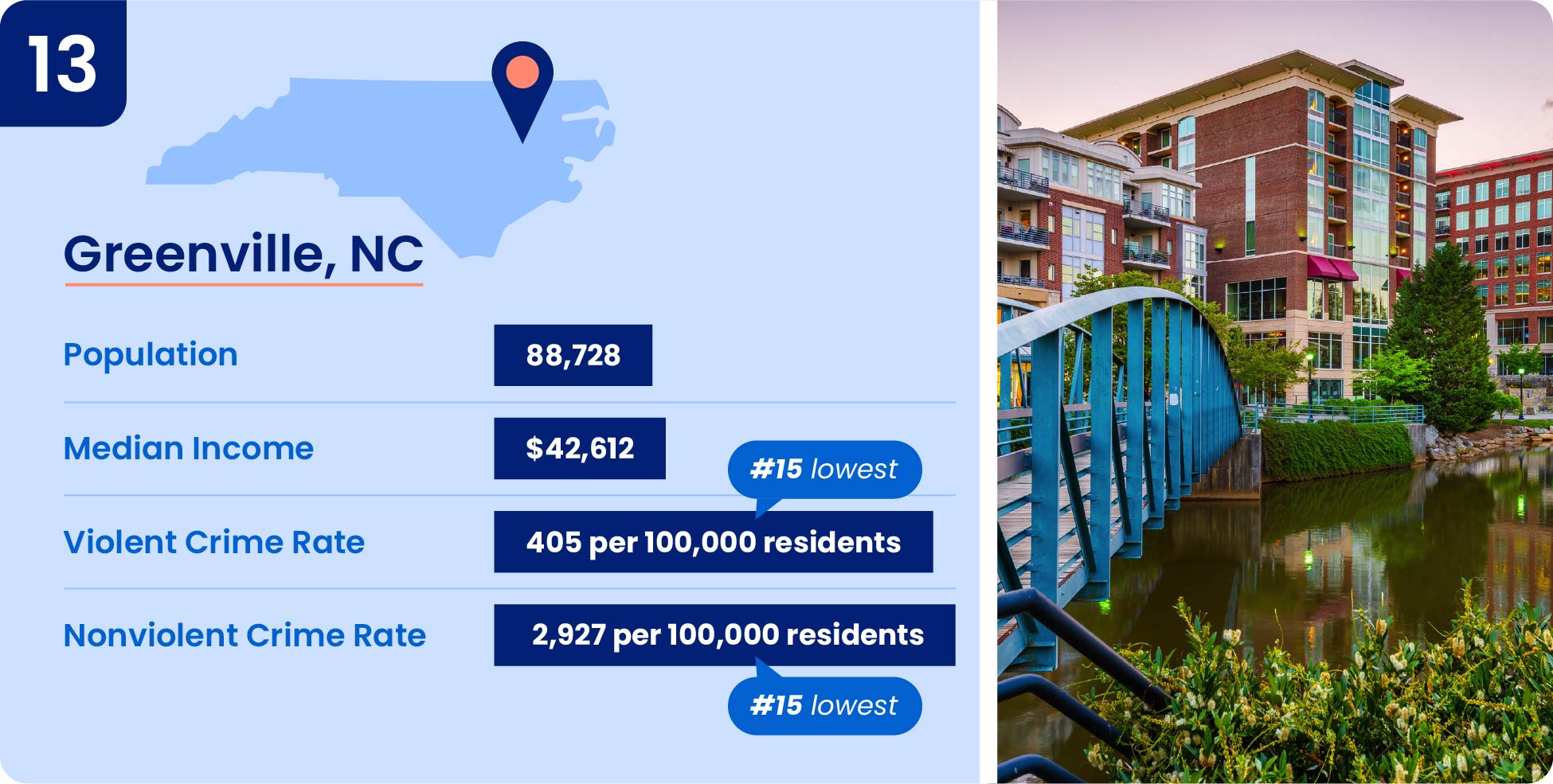 Most of High Point, North Carolina is in Guilford County, though it’s the only city in North Carolina to span four counties. It was once the home furnishings capital of the world, but now the industries that fuel High Point are more diverse, including education, banking, and technology.

High Point ranks 17th on our list for both violent and nonviolent crime. The cost of living in this city is very low, at 18.2% below national data, earning it its spot as the 14th safest city on our list. 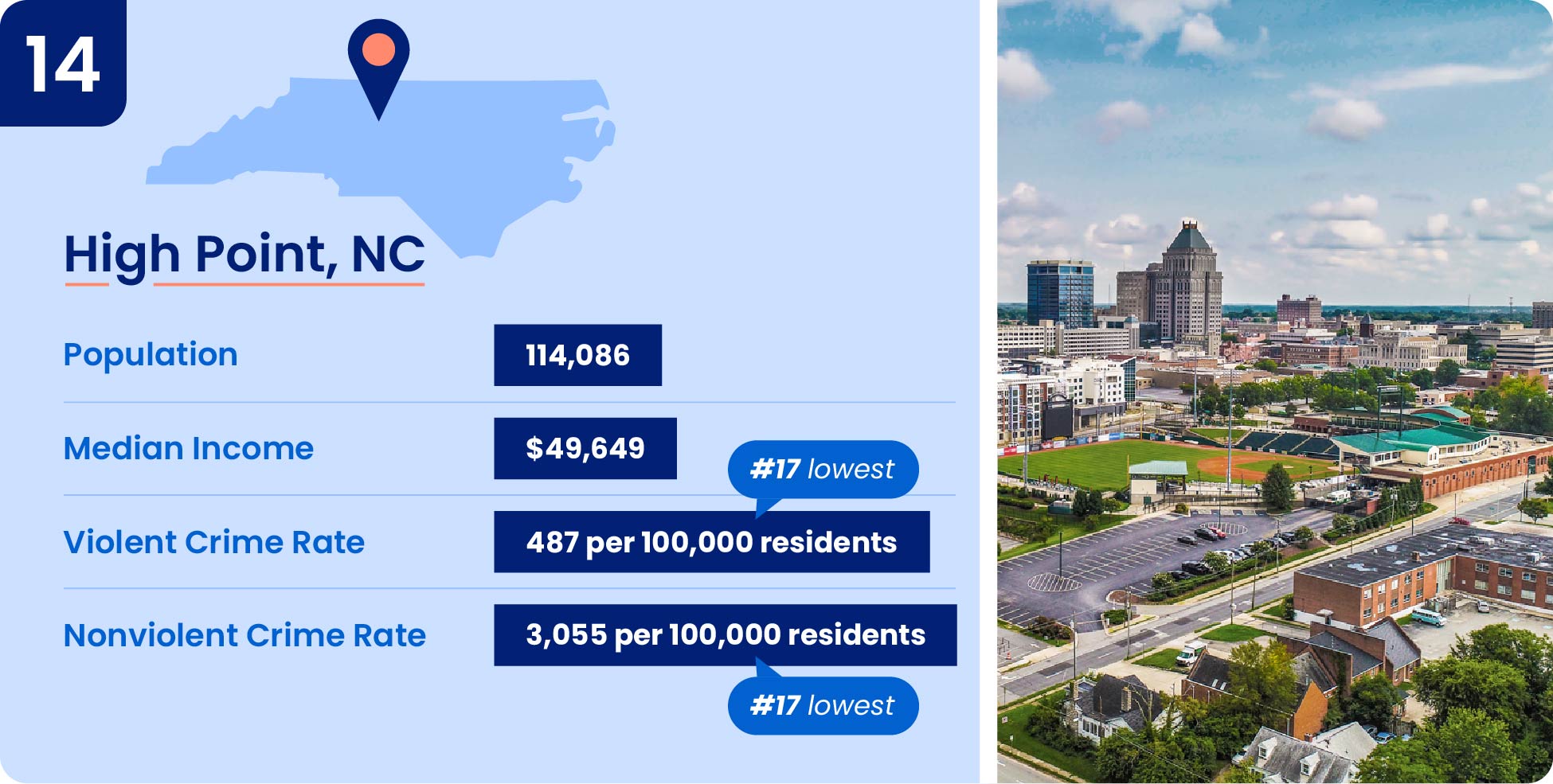 Hickory is a town you’ll find north of Charlotte, and ranks 15th for overall safety on our list. The city has been working on improvements like a 10-mile combined city walk, art walk, and river walk and a downtown revitalization project.

Hickory ranks 14th on our list for violent crime with higher instances of nonviolent crime. However, the cost of living is quite low, at 13.1% cheaper than the U.S. average. 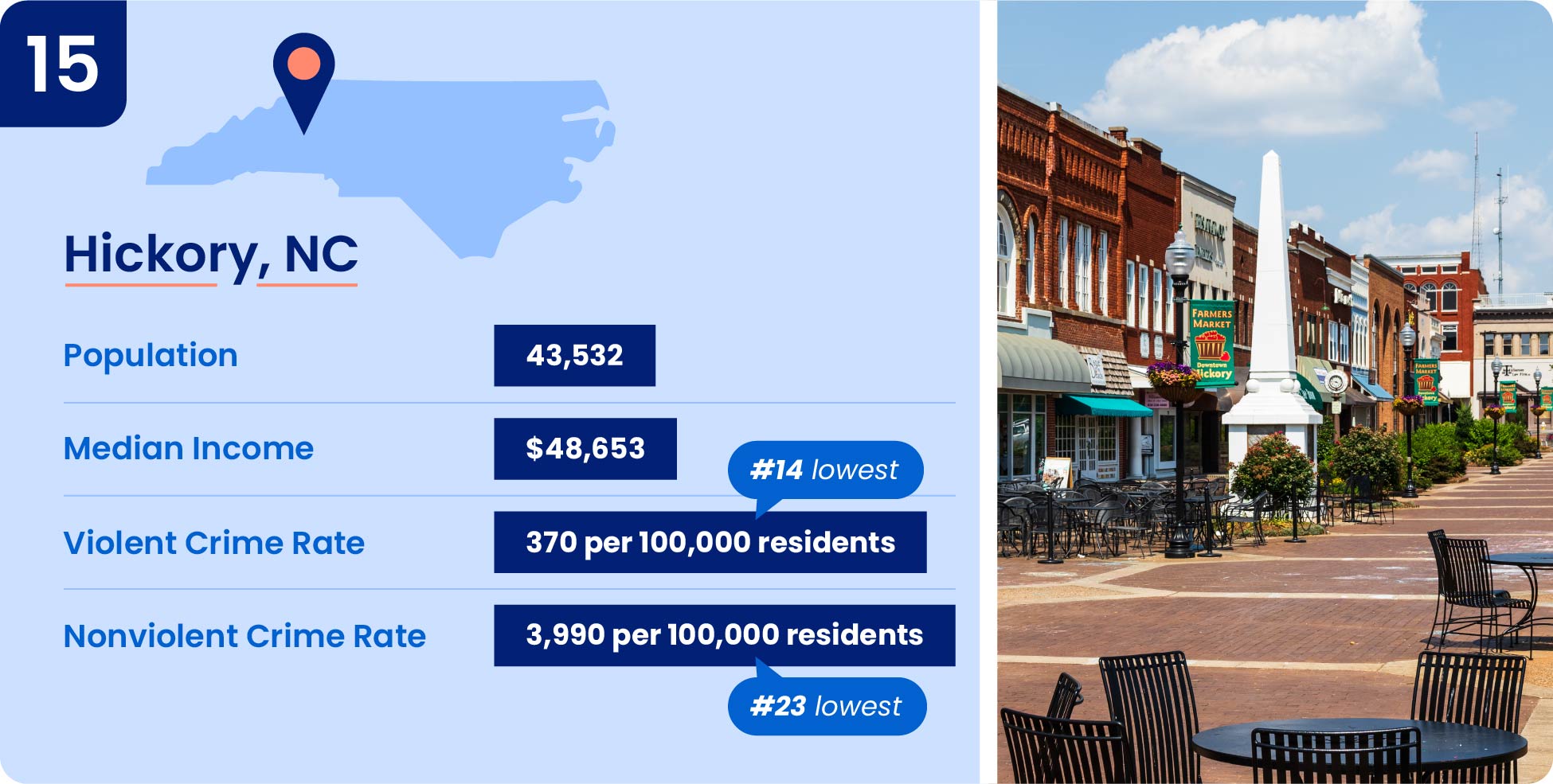 Other Safe Cities in North Carolina

These cities didn’t make our top 15 ranking for safest cities in North Carolina, but that doesn’t mean they won’t be a good fit for your next home.

To evaluate the safest city in North Carolina, we gathered data from the 30 most populous cities in the state. Indian Trail, NC was excluded from the dataset due to a lack of information about crime rates, and Huntersville, NC was excluded due to environmental risks from the 2020 pipeline spill.

We sourced population and economic data from U.S. Census 2021 estimates, crime data from the FBI Crime Data Explorer, and cost of living from the Best Places Cost of Living Index.

We analyzed the following factors and weighted them as noted:

Feel at Home With UpHomes

From sunny weather to a low cost of living, there are so many reasons that over 10 million people call North Carolina home. That’s why we’ve compiled the safest cities and towns in North Carolina so you can make the best choice for you and your family.