10 Things to Know BEFORE Moving to Dallas, TX 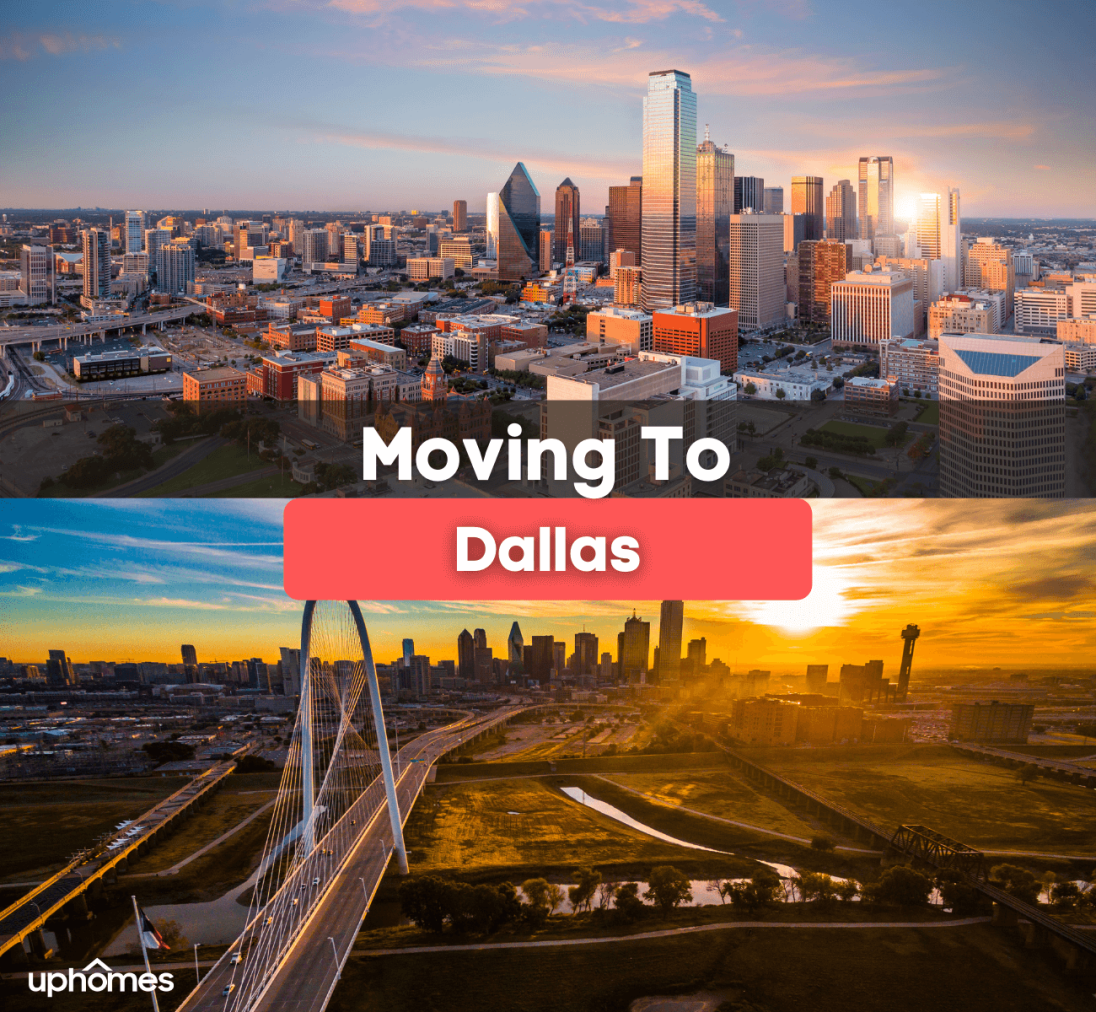 Life in Dallas, TX: What is it like moving to Dallas, TX?

If you are making the big move to Dallas, Texas then make sure to pack your cowboy boots and hats. Home to a population of 1.3 million people, Dallas is a large city located in Northern Texas that is most well known for its amazing weather and flourishing economy.  A good place to live, Dallas is considered one of the best places to live in Texas and is popular among young professionals and families looking to relocate to the lone star state. 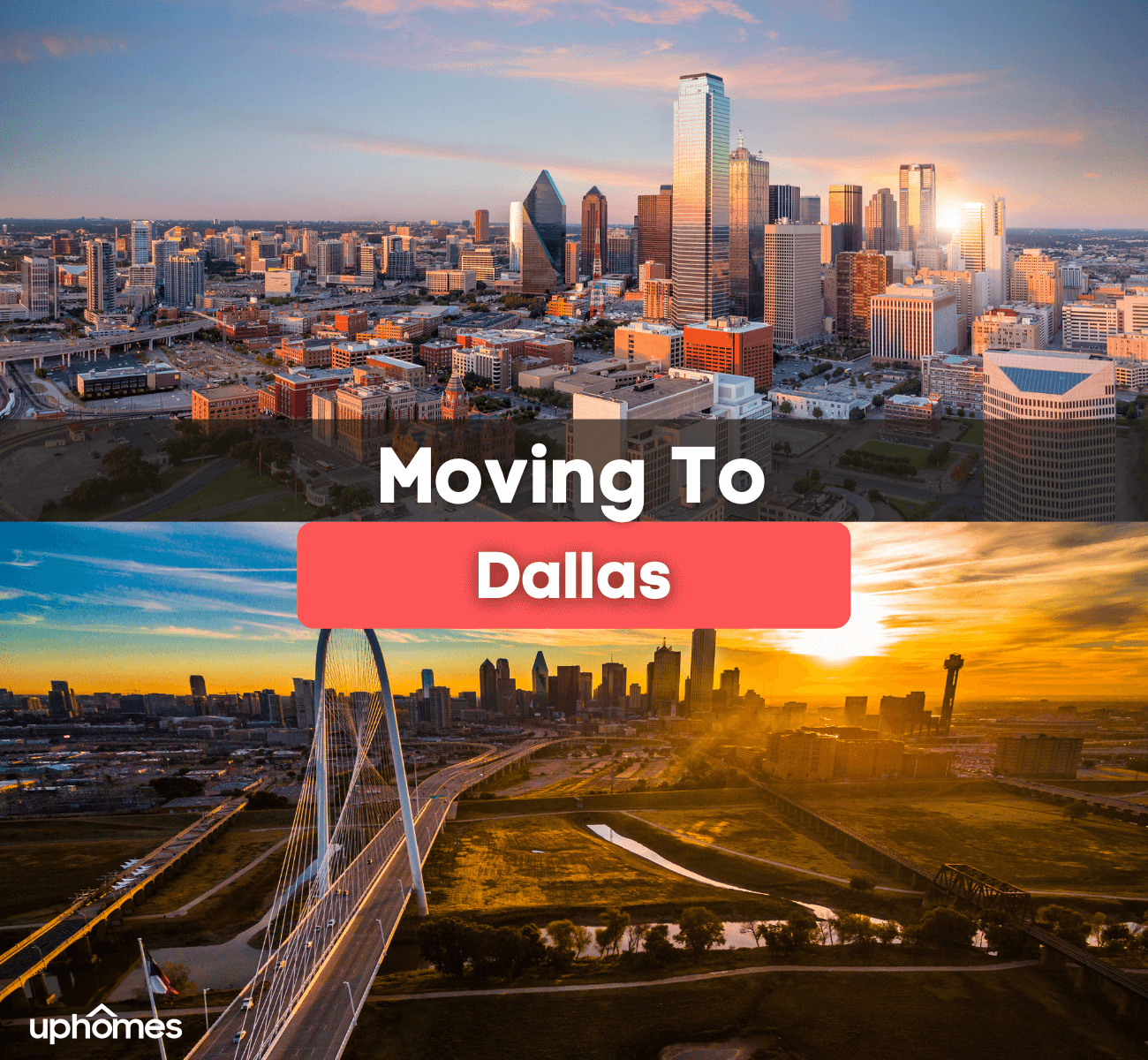 Considered one of the safest big cities in America, Dallas takes pride in its well-maintained streets and sought-after neighborhoods. Definitely, worth the move, Dallas is a booming city due to its beautiful scenery and bustling entertainment district. Full of many pros and cons, there are certainly some things that every potential resident should know before settling down in Dallas. While moving can be stressful, this moving guide was created to help you decide whether or not Dallas is the place for you. Without further ado, read on to learn more about the 10 Things to Know BEFORE Moving to Dallas, Texas!

One of the many reasons why everyone wants to move to Texas is its affordable cost of living and lower prices. While living in Dallas may be a bit more expensive than other cities in Texas, Dallas is only about 1% more expensive than the national average and is still less expensive than living in Austin. Considering its growth rate and popularity, this means that Dallas is a great option for any income level. In fact, in order to live comfortably in Dallas, the median household income is around $58,000 a year. With everyday expenses such as healthcare, housing, and groceries costing less than the national average, it is no wonder that Dallas is so highly regarded. Not to mention, thanks to no personal income tax in the state, Texans can save even more money. Today, more and more Californians are choosing to flock to Texas for this monetary reprieve. Compared to living in San Francisco or living in Los Angeles, the cost of living in Dallas, Texas is arguably better than California.

Dallas is booming with job opportunities. Gaining more than 48,000 jobs over the past year, if you are moving to the area in search of work then you will not be looking for long. Home to 10 Fortune 500 companies including Southwest Airlines, AT&T, ExxonMobil, and CBRE Group, more and more successful businesses are deciding to make Dallas their headquarters. Experiencing an 8% increase in job growth, which is more than the national average, Dallas is becoming the go-to destination for those looking to improve their careers. As of today, the top industries in the area are technology, healthcare, defense, financial services, manufacturing, and the oil and gas industry. A great city for entrepreneurial spirits, Dallas is also becoming the perfect place for start-ups to get up and running. Ranked as the 10th Best City for Business and Careers, Dallas is an economic powerhouse and leader. 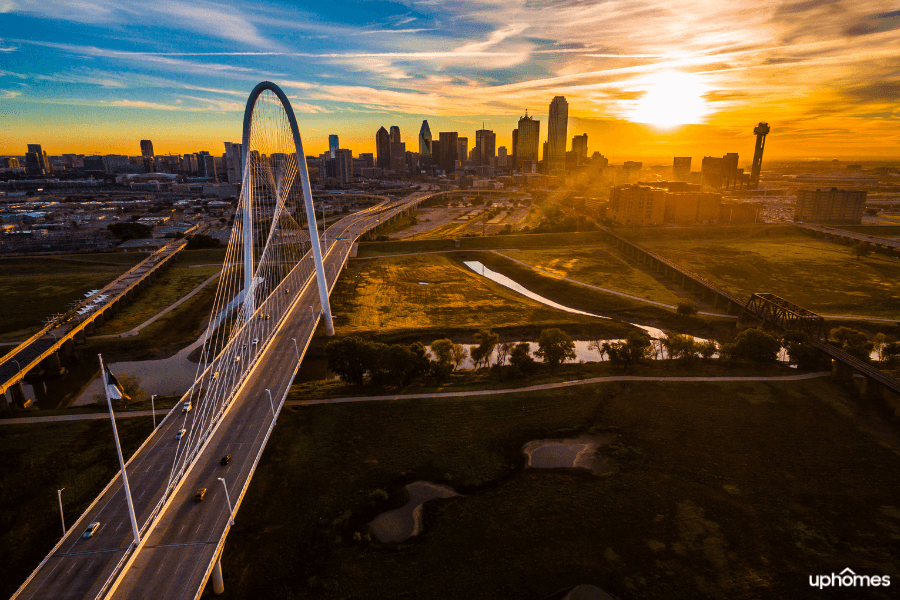 The summers are scorching hot.

Dallas, Texas has a humid subtropical climate which means that the summers are hot and humid while the winters are mild. Receiving an average of 39 inches of rain per year, rainfall in Dallas is more than the national average. With an average of 234 sunny days a year, residents love to spend time outdoors and enjoy the moderate temperatures. August is the hottest month in the city with an average high temperature of 95 degrees Fahrenheit. Meanwhile, January is the coldest month with an average low temperature of 35 degrees Fahrenheit. The months of April, May, and October are considered the most pleasant months due to mild temperatures. If you are moving from a colder climate then feel free to leave your snow shovel behind. Dallas receives an average of one inch of snow per year if any since temperatures rarely dip below freezing.

While California has earthquakes and Florida has hurricanes, Texas is prone to tornadoes. Located in Tornado Alley, Dallas and the rest of North Texas receives an average of 132 tornadoes per year. While Texas is on the southern end of the Tornado Alley, tornadoes are a reality in Dallas that needs to be taken seriously. If you are moving from an area without tornadoes then it is important to understand how dangerous they can actually be. Interestingly enough, even though Dallas receives tornadoes and basements are one of the best defenses against them, the city rarely has homes that are built with basements due to the frost line. In order to stay safe during a tornado in Dallas make sure to stay away from doors and windows, go to the center of the room on the lowest floor, and use your arms to protect your neck and head. Stay alert and be aware of your surroundings.

Even though Texas is big, sports in the state are even bigger. The city of Dallas in particular is a sports town that is home to up to six professional teams and multiple college teams. No matter what sport you like to support, once you move to Dallas you will soon find yourself cheering for the home team. Perhaps the most famous team in the area is the Dallas Cowboys who play for the National Football League. Famous for its cheerleaders, the Dallas Cowboys play at AT&T stadium downtown and it is a must-do for residents to attend at least one game while living in the city. Other teams in the area include the Dallas Stars NHL team, the Dallas Mavericks NBA team, the Dallas Wings WNBA team, the FC Dallas MLS team, and the Texas Rangers MLB team. Not to mention NASCAR and golf reign supreme here as well. 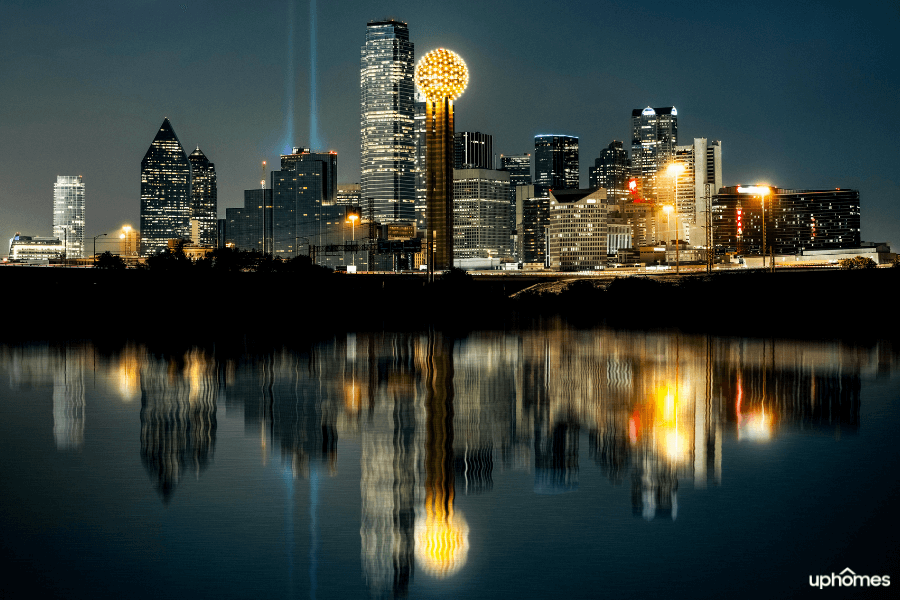 Even though Dallas is a large city, the area has plenty of parks and open green spaces that residents can enjoy. In fact, Dallas is actually home to the largest urban forest in the entire United States. If you love spending time outdoors and exploring nature then Dallas may be just the place for you. Featuring many parks, lakes, greenways, biking trails, picnic areas, and forests, Dallas has no shortage of outdoor spaces to check out. Whether you want to go on a run with your dog or kayaking with your family, outdoor recreation is the key to enjoying life in Dallas.

Check out these local favorite parks and green spaces in Dallas, Texas!

Dallas is home to a fantastic public school system and many highly rated schools for all grade levels. Thanks to the Carroll ISD School District and the Dallas Independent School District in the city, Dallas is actually the location of eight of the top 20 schools in the state of Texas. Some of the top schools in the area include Jasper High School, Carroll Senior High School, Dallas School of Science and Engineering, and the Dallas School for the Talented and Gifted. If you are moving to the area with school-aged children, it might be a good idea to move to a neighborhood that feeds into the schools that you would want your children to attend before buying a home.

For those looking for higher education opportunities, Dallas is no stranger to great colleges and universities. With more than 30 institutions to choose from, it is safe to say that Dallas prioritizes education and learning. Plus, thanks to in-state tuition status, take your new Texas residency to the next level by furthering your education at a top-rated school in the area. Some of the most popular colleges and universities in Dallas include The University of Texas at Dallas, The University of Northern Texas, Southern Methodist University, and Dallas Baptist University. Texas A&M is only about three hours away from Dallas.

Residents love to eat out. 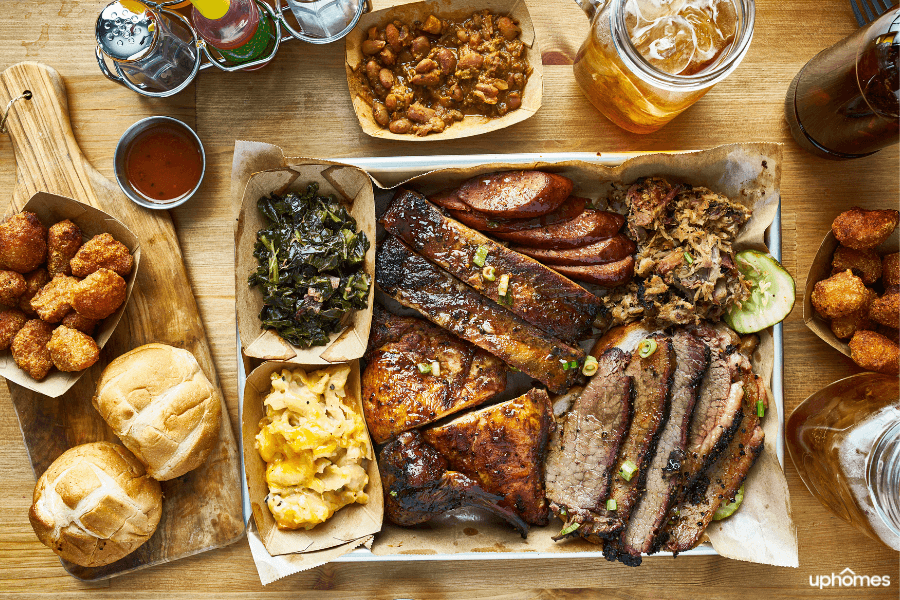 The dining scene in Dallas is definitely something to talk about. From award-winning restaurants to small-town cafes, finding a good meal in Dallas is easy to come by. Quickly becoming a foodie city, the cuisine in Dallas will appeal to even the pickiest of eaters. Best known for its Texas barbeque and amazing Tex-Mex, Dallas is serving up only the most iconic dishes from barbeque brisket to homemade tacos.

Check out some of these local favorites restaurants in Dallas, Texas!

Traffic can be hectic

Since Dallas is so large and spread out, owning a car will certainly make life easier. While there may be many walkable sections of the city, it can also take up to an hour just to get from one end to the other. Even though owning your own car has its advantages, the traffic in Dallas can be a bit intimidating. On the freeways around rush hour, in particular, prepare to be stuck in traffic for long periods of time. This is especially important to consider when factoring in commute time to and from work. For those that choose to not have a car, the Dallas Area Rapid Transit System is a great option.

Head to the state fair.

The Texas State Fair is held in Dallas every year and it is a must-do experience for both native and new residents. Held at the historic Fair Park, bring your family for days full of exciting games, activities, and out-of-this-world fair food. Promoting agriculture and education in Texas, the Texas State Fair brings the community together and supports local vendors. Usually lasting for 24 days at the end of September into October, prepare to feast on all of the funnel cake and cotton candy that your heart desires.

A great place to live in Texas, Dallas has many opportunities, great schools, and only the best of southern hospitality. Whether you want to live in the center of downtown near all of the action or in a quiet suburban neighborhood near nature, Dallas certainly has a place for you. If you are moving to Dallas and want to buy a home, make sure to reach out to one of our knowledgeable and experienced Realty Specialists to aid and guide you through the home buying process. No matter what budget you may have or what property type you desire, our team is here to help every step of the way. Contact us today to find your dream home in Dallas, Texas!