11 Things to Know BEFORE Moving to Chicago

Are you thinking about moving to Chicago? Here's what it's like living in Chicago!

The windy city of Chicago, Illinois is located in northeastern Illinois on the shores of Lake Michigan. With a population of 2.71 million people, Chicago is the most populated city in Illinois and the third most populous city in the country. As one of the top largest urban areas in the world, the Chicago metropolitan area is a good place to live and is considered to be one of the best places to live in Illinois. Attracting many young professionals and families to the city for its abundance of opportunities, Chicago is best known for its breathtaking architecture, loyal sports fans, and Chicago deep-dish pizzas and hotdogs.

As part of the midwestern United States and the Great Lakes region, Chicago offers its residents the perfect transition to the hustle and bustle of city life through top amenities and reliable public transportation. Even though the city gets a bad reputation for its high crime rate, there are still plenty of safe areas and nice neighborhoods available to raise a family. 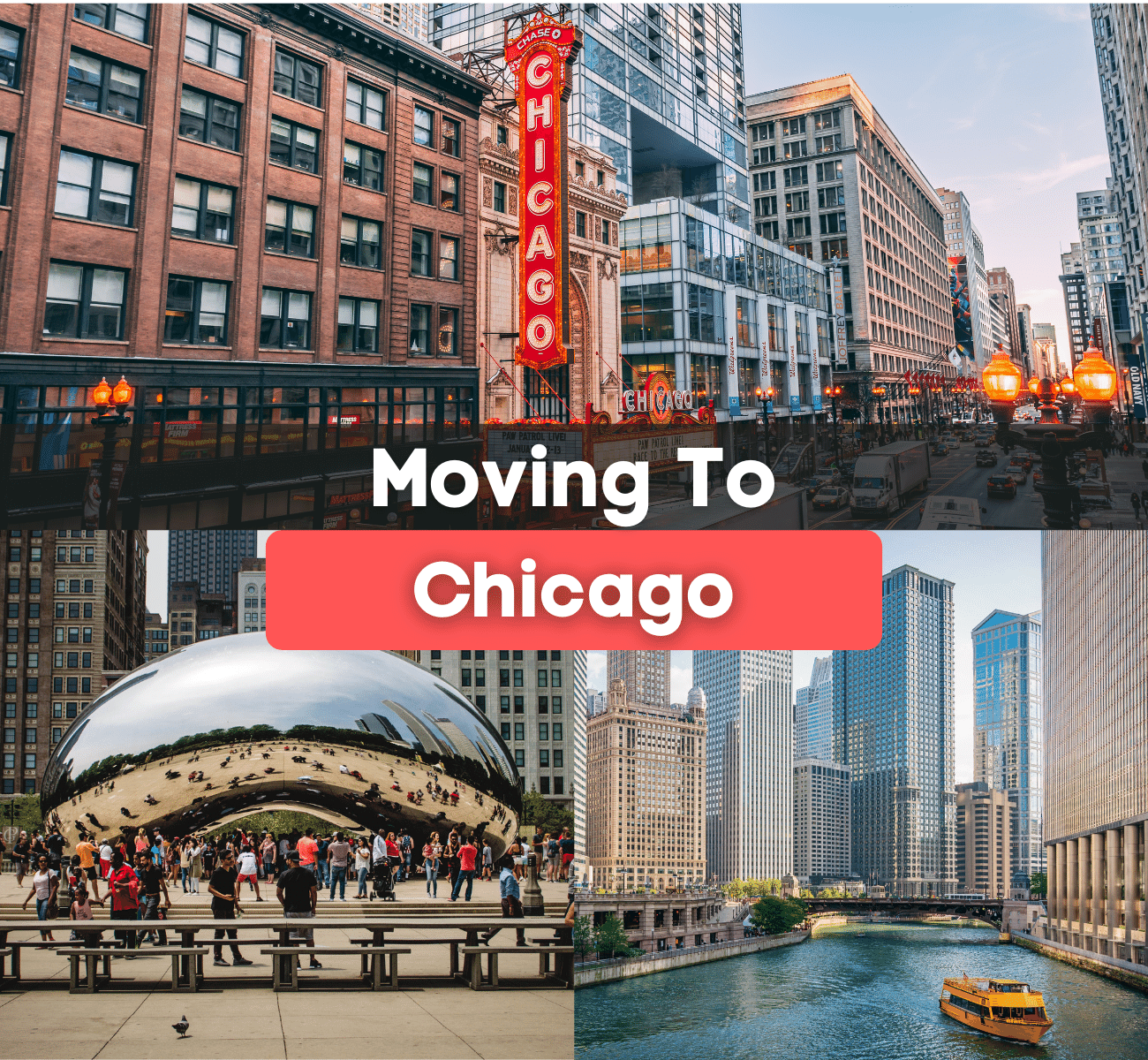 If you are moving to Illinois and are thinking about making Chicago your new home then you have come to the right place. Even though moving to a new area is exciting, it can often feel stressful and overwhelming, especially if you know nothing about your new city. Luckily, this moving guide was created with you in mind to help you better understand life in Chicago. By providing you with the pros and cons of Chicago as well as the local favorites and most popular attractions, find out for yourself if Chicago is the right place for you before even packing up your belongings.

With that being said, read on to learn more about the 11 Things to Know BEFORE Moving to Chicago, Illinois!

The cost of living in Chicago is pricey.

Since housing costs are 56% higher than the national average, your salary while living in Chicago will definitely determine the lifestyle that you will be able to afford. In order to afford a one-bedroom apartment in Chicago, it is recommended that a single individual will need to be making an average annual salary of at least $46,222. The living wage in Chicago is around $16 an hour. The high sales tax and the high costs of goods and services are also a large part of why Chicago is so expensive.

Chicago has many different neighborhoods.

South Chicago: Find a variety of cultural attractions and museums that celebrate the city's diversity. Chinatown is a popular neighborhood on this side of town.

West Chicago: The neighborhoods on the west side are trendy and are surrounded by monuments, murals, and top-rated restaurants.

The Chicago Loop: Found in the Downtown area, The Loop is made up of historic architecture, hip businesses, and some of the best entertainment in the city. 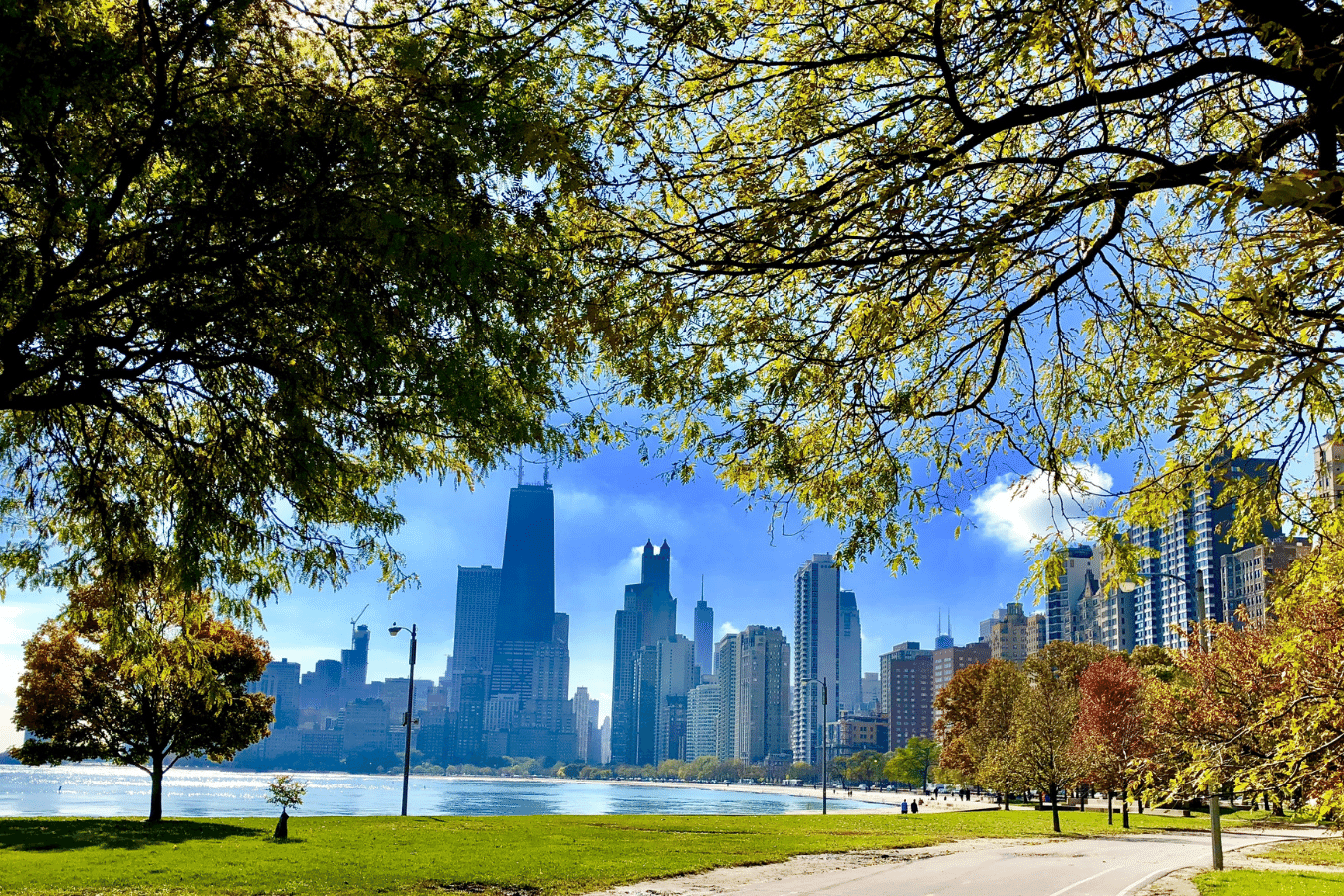 Renting and buying a home in Chicago is easy.

Even though the housing prices in Chicago may be among the highest expenses in the city, finding a home that meets your budget is actually easier to come by than you think. Known to be a seller’s market, Chicago currently has a 3.1-month supply of homes. While the population continues to grow, the housing market follows a similar trend as the demand for available housing increases. Considered to be one of the best housing markets in North America to reach a bargain, there is no time like to present to buy or rent a home.

The job market is diverse.

Did you know that Chicago is home to 36 different Fortune 500 companies? As a center of commerce, trade, retail, and finance, Chicago offers plenty of employment opportunities for anyone that is actively looking for a job whether it be for a small start-up company or a well-known brand. Much like other cities in the country, Chicago, unfortunately, took a major hit to the economy during the COVID-19 Pandemic due to business closures and restrictions. As the United States slowly returns to a sense of normalcy, Chicago is steadily showing improvement as residents get back to work and businesses increase production.

Known for having one of the highest Gross Domestic Products (GDP) in the world, the GDP in Chicago amounts to almost $700 billion alone. With economic industries in leisure, hospitality, manufacturing, transportation, health services, and information technology, Chicago has one of the most diverse economies in the nation. Some of the top companies that are located in Chicago include Boeing, United Airlines, Caterpillar, Conagra Brands, and Deloitte. 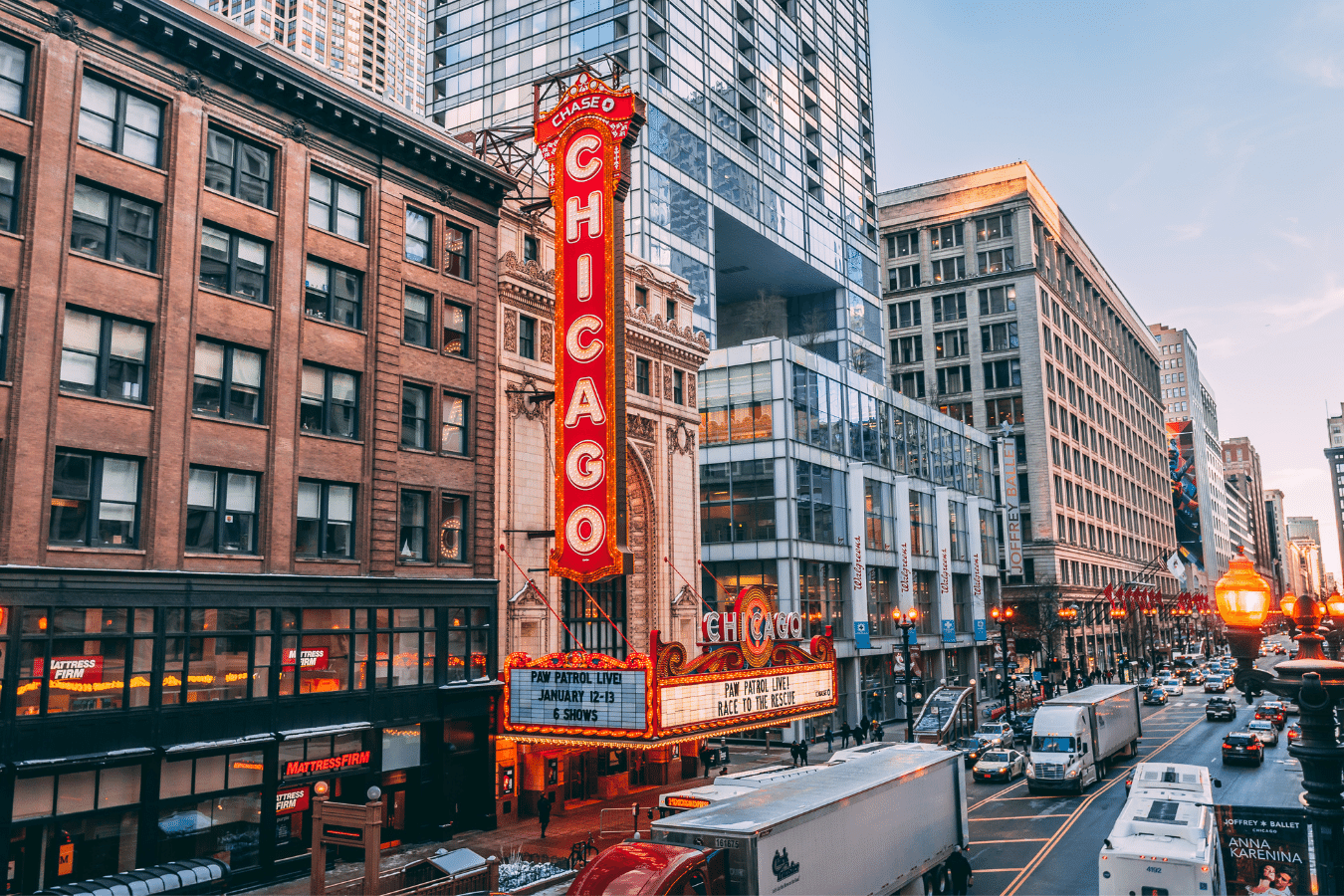 Bring your own car.

While Chicago may have its own form of reliable public transportation, most residents choose to bring their own car for convenience. Even if there may be a few areas in the city, particularly Downtown, that are walkable and bikeable, driving your own car is the desired mode of transportation among the locals. Keep in mind that while most residents choose to drive their own cars, the traffic in Chicago can be extremely heavy and unfavorable specifically during rush hour which can be a challenge for commuters. Parking is also known to be a nightmare so make sure to prepare yourself for no parking signs, tow-away zones, and insanely expensive parking passes. If you are going to bring your own car, make sure to factor in commute time and parking availability before buying a home.

Classified as a humid continental climate, the residents of Chicago can expect hot and humid summers alongside cold winters. Since Chicago shares the shores of Lake Michigan, breezy summers and strong winds can become a common occurrence and have led to its nickname as “The Windy City.” While high temperatures in the summer can reach over 90 degrees Fahrenheit, the winters can bring frigid temperatures that dip below 19 degrees Fahrenheit. Receiving an average of 35 inches of snow per year which is 10 inches above the national average, residents are encouraged to always dress appropriately and to invest in windbreakers, heavy coats, and waterproof boots.

The violent crime rate in Chicago is 164% higher than the national average which makes it one of the highest crime cities in the United States. Meanwhile, the property crime rate is 45% higher than the national average. This means that your chances of becoming a victim of violent crime are one in 105 and your chances of becoming a victim of property crime are one in 33. In 2020, the murder rate also rose by 25% which makes it one of the largest increases in United States history. Since crime is such an issue in Chicago, it is important to always be aware of your surroundings and to never let your guard down. Much like living in other large cities in the country, remember to always lock your doors and do not walk by yourself. If you are moving to Chicago on your own, make sure to check out this Living Alone: Home Safety Checklist for more tips and tricks.

The food is amazing.

The food scene in Chicago is frequently talked about for its unique flavors and modern twist on favorite classics. Quickly becoming a top foodie destination, some of the most famous food in Chicago include deep-dish pizza, hotdogs, Chicago barbeque, Italian beef sandwiches, and Chicago-style popcorn. Home to many popular restaurants, cafes, and street food vendors, never run out of a new dish to try.

Check out these local favorite restaurants in Chicago, IL:

XOCO: Dine on Mexican street food including homemade guacamole and carnitas. Make sure to order a margarita with your meal.

Chicago has many cool traditions that residents love to get involved in. From St. Patrick’s Day to New Year’s Eve, Chicago sure knows how to celebrate in its own way. Drawing in thousands of locals and visitors to the city each year, these annual events and festivals make living in Chicago fun and worth it.

Check out these local favorite traditions and events in Chicago, IL:

St. Patrick’s Day in Chicago: The city dyes the Chicago River green and celebrates the holiday through parades and performances.

Bank of America Chicago Marathon: Spanning across 29 Chicago neighborhoods, this marathon in October is one of the six World Marathon Majors. 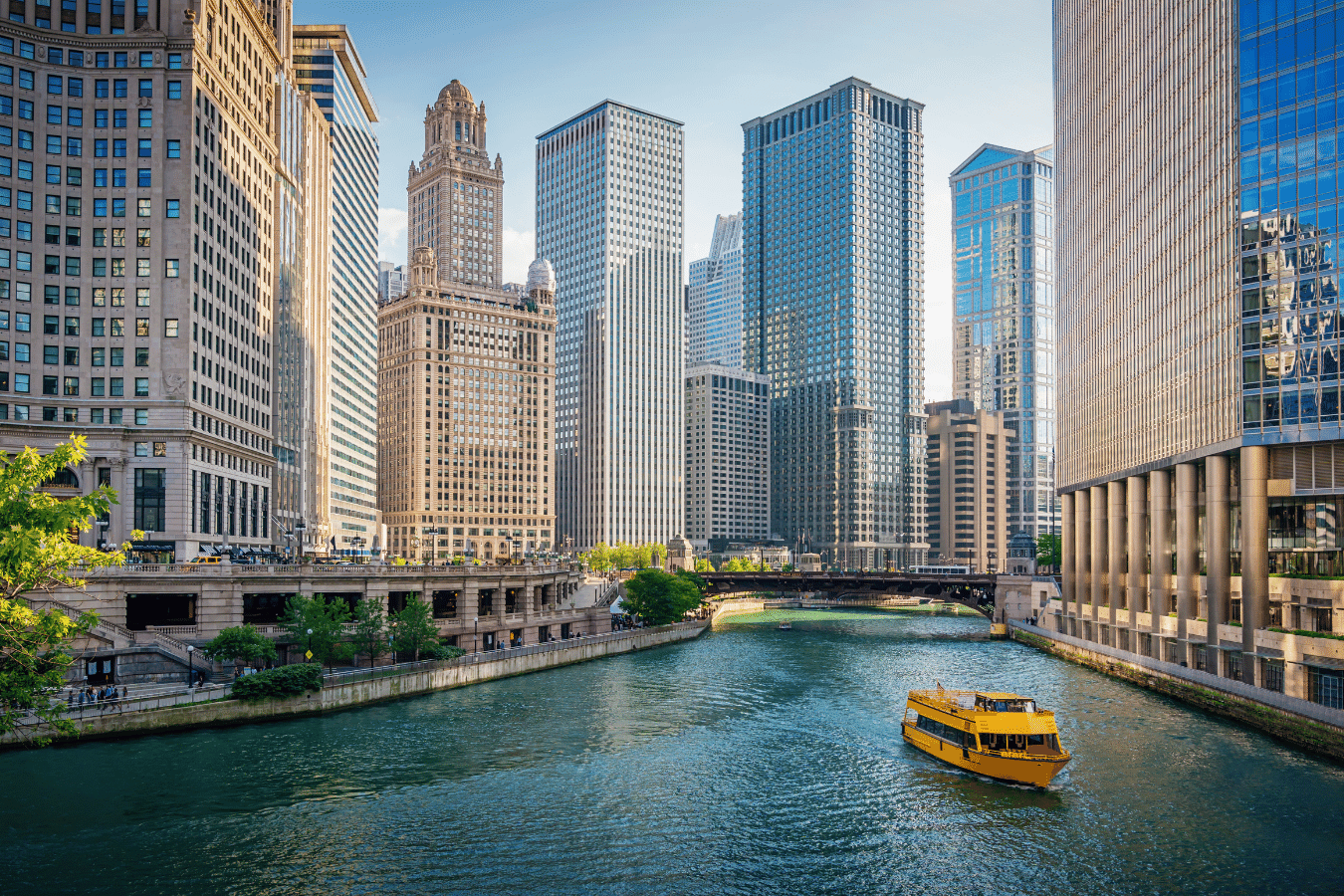 Go to the beach.

Even though Chicago is nowhere near the ocean, Lake Michigan luckily has up to 26 miles of public lakefront that residents use to soak up the sun and partake in watersport activities.

Check out these local favorite beaches in Chicago, IL:

Humboldt Beach Park: A popular spot for swimming, this beach has lifeguards on duty and is great for younger children.

North Shore Beach Park: Come to this beach park for a quiet afternoon stroll along the water. This beach is also dog-friendly.

Montrose Beach: Great for swimming, jet-skiing, and beach volleyball. This is a great family-friendly beach.

There is always something to do.

Full of famous activities and world-class attractions, Chicago has a never-ending amount of things to do all year-round. Whether you are looking for a new date idea or your next new adventure, never be bored when you are living in Chicago.

Check out these local favorite things to do in Chicago, IL:

The Chicago Theatre: Built-in 1921, this historic theatre is host to plays, concerts, and comedy shows.

Buckingham Fountain: This landmark is one of the largest fountains in the world.

Whether you are looking for a loft apartment Downtown or a single-family home in one of the many suburbs, Chicago has many housing options available for any lifestyle. As a good city to move to that is worth living in, Chicago is a vibrant city with friendly residents. Once you have decided that you want to buy a home in Chicago, reach out to one of our knowledgeable Realty Specialists to guide you through the home buying process. With the help of our team, find a safe and affordable home in no time. Contact us today!